An expanding ecosystem and the full launch of Elrond’s DeFi capabilities back EGLD’s rally above $300. 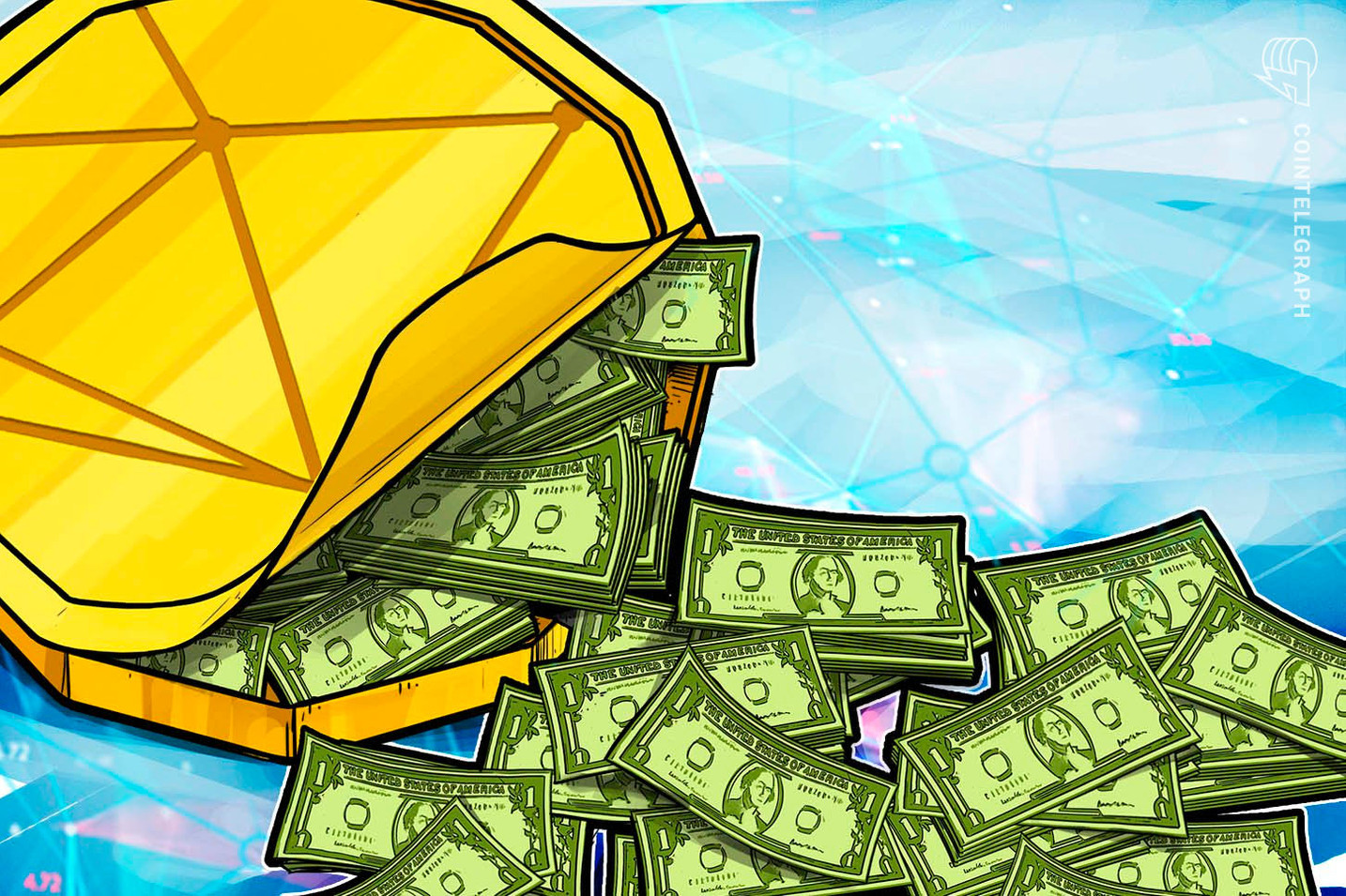 DeFi-focused protocols are seeing a sustained upward move and the the momentum appaers to be picking up pace now that the NFT sector has cooled off over the past two weeks.

Since the beginning of August, Elrond (EGLD), a scalable and secure blockchain platform designed for distributed apps and enterprise-level businesses has been in a strong rally.

Data from Cointelegraph Markets Pro and TradingView shows that since hitting a low of $52 on June 22, the price of EGLD has charged 437% higher to a new all-time high at $302.14 on Sept. 14. 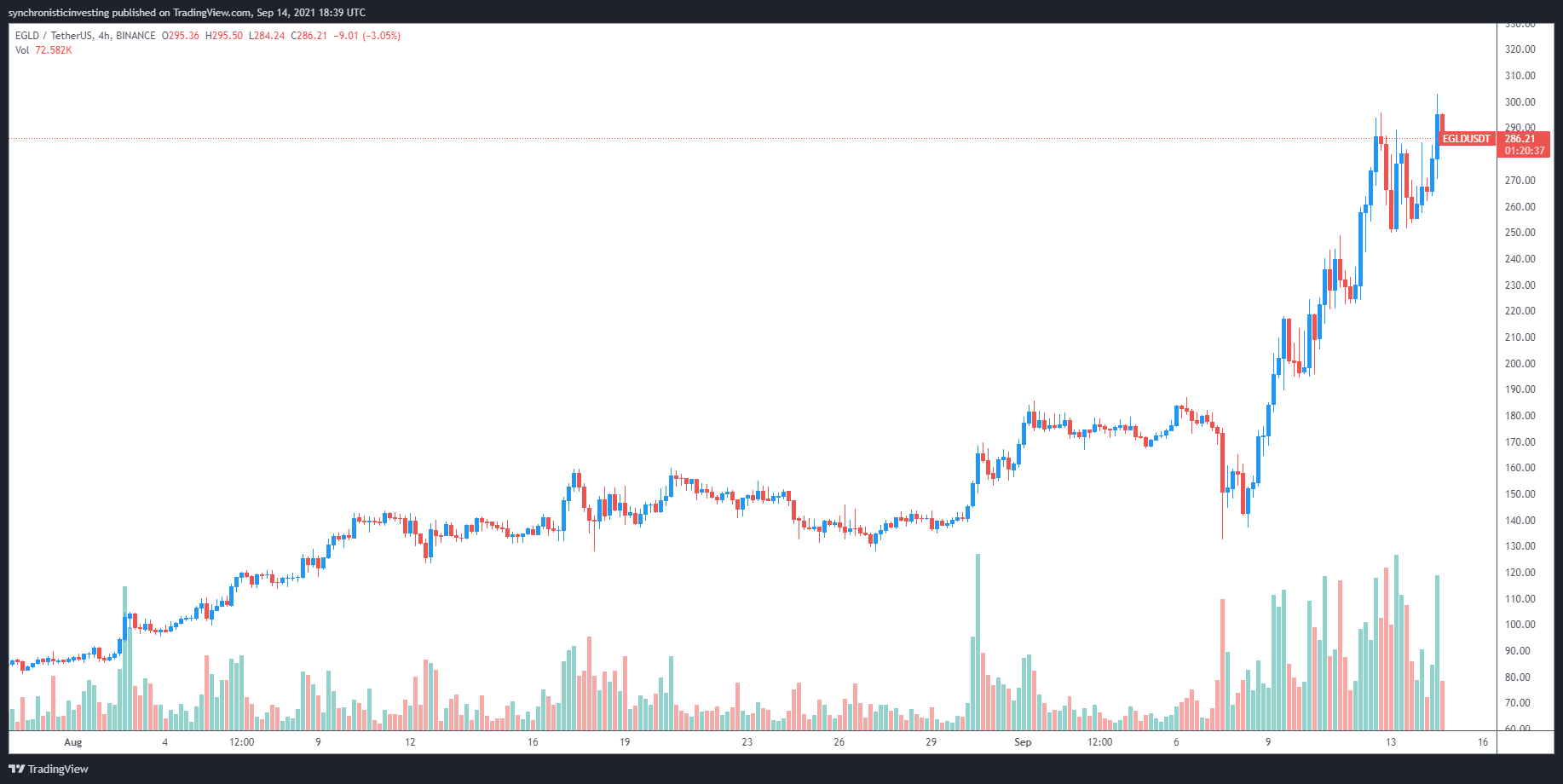 Three reasons for EGLD's surge to a new all-time high include the full release of the protocol's Maiar exchange, the altcoin's listing on KuCoin and a string of partnerships and integrations that expand the Elrond ecosystem.

The recent momentum for EGLD has is the result of the Maiar exchange launch, a DeFi protocol built on the Elrond network that allows users to trade, provide liquidity in various pools

On Sept. 9 it was announced that U.S. citizens could now purchase EGLD tokens directly through the Maiar app thanks to an integration MoonPay, giving the project access to the world’s largest retail economy.

In an effort to attract new users and display the capabilities of the Elrond Network, Maiar also launched a $100,000 “Battle of the Yields” contest on Sept. 14 which gives users an opportunity to win EGLD based on their trading volumes.

Another reason for the recent strength seen in EGLD was its listing on KuCoin exchange, the fifth largest exchange by 24-hour trading volume.

New exchange listings are often followed by strong rallies for the token, especially when paired with perpetual futures markets or a top-5 exchange by trading volume.

The token's addition to KuCoin, along with the launch of Maiar Exchange has brought a new level of exposure to EGLD and its 24-hour trading volume increased from a daily average of $83 million to $740 million on Sept. 11.

A third factor backing Elrond’s rally is the growth of its ecosystem. Recent partnerships include the addition of AI-generated media content through a partnership with Humans.ai and an agreement with NewsCrypto (NWC) which allows users to learn more about Elrond through the platform's 'crypto academy'. Elrond also has a new integration with Copper, a major digital custody provider.

The network has also partnered with companies focused on gaming, DeFi and cross-chain transfers between Ethereum, Polkadot and the Binance Smart Chain.

According to data from Cointelegraph Markets Pro, market conditions for EGLD have been favorable for some time.

The VORTECS™ Score, exclusive to Cointelegraph, is an algorithmic comparison of historical and current market conditions derived from a combination of data points including market sentiment, trading volume, recent price movements and Twitter activity. 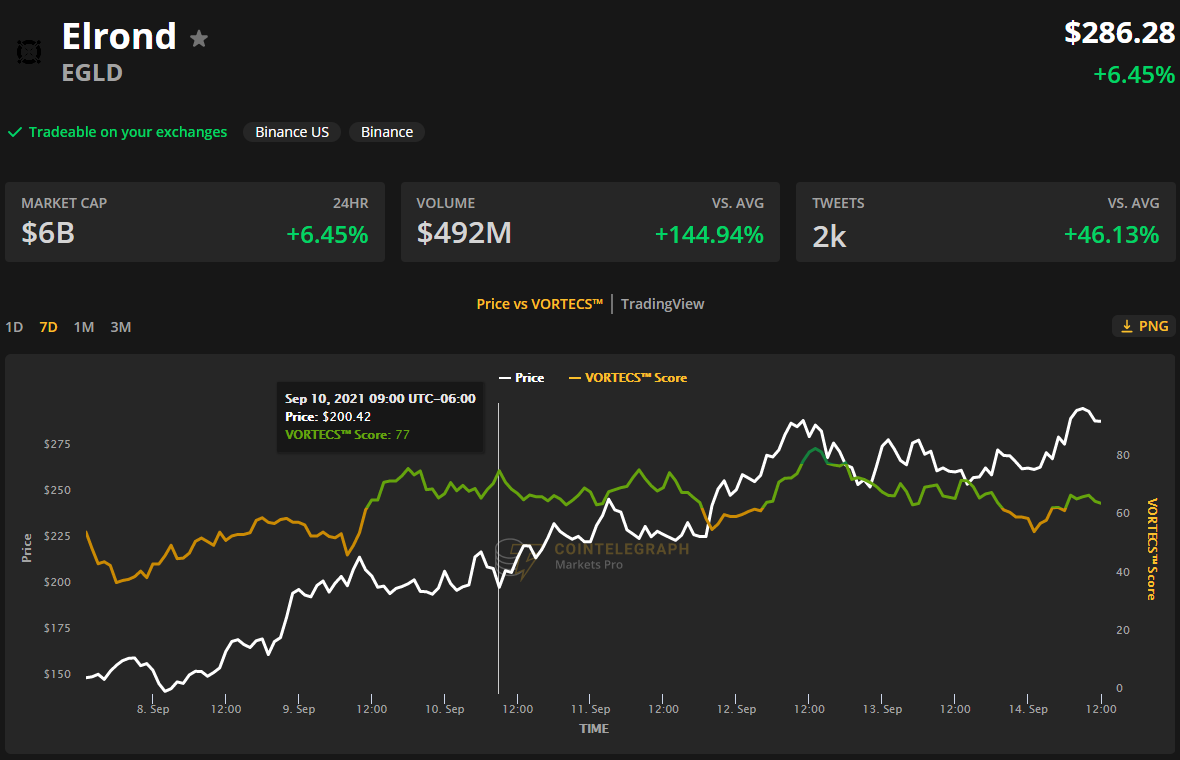 As seen in the chart above, the VORTECS™ Score for EGLD began to pick up on Sept. 10 and reached a high of 77, around one hour before the price began to increase by 55% over the next four days.

The views and opinions expressed here are solely those of the author and do not necessarily reflect the views of Cointelegraph.com. Every investment and trading move involves risk, you should conduct your own research when making a decision.

US banks to allow Bitcoin trading in 2021, says NYDIG execs

Numerous On-Chain Metrics Turn In Favor Of Ethereum - $500 Next?

Bitcoin price nears $11K for the first time in a year

Forkast.News Staff
文章 117 篇
Forkast is a digital media platform that covers future thinking in times of change –– the stories of blockchain and emerging technology at the intersection of business, economy, and politics. From Asia, to the world.

Solana Price Shoots Up 14% to Score Another All-Time High