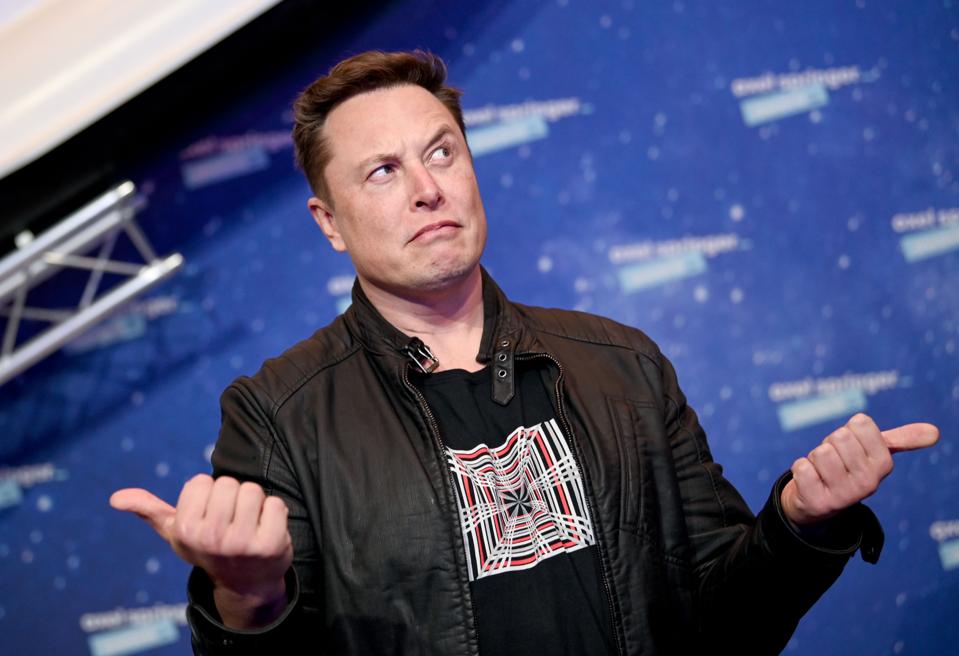 SpaceX owner and Tesla CEO Elon Musk (R) gestures as he arrives on the red carpet for the Axel ... [+] Springer Awards ceremony, in Berlin, on December 1, 2020. (Photo by Britta Pedersen / POOL / AFP) (Photo by BRITTA PEDERSEN/POOL/AFP via Getty Images)

With Tesla’s TSLA TSLA recent $1.5 billion purchase of bitcoin, and the surge in bitcoin price, there has been a renewed interest in arguments that describe as bitcoin as wasteful and the cause of immense environmental damage. One of Elon Musk’s priorities is to address climate change — how does that square with bitcoin?

Arguments that bitcoin causes tons of carbon emissions and environmental degradation miss the mark. There are technical and specific tactical arguments to make here: the increasing use of renewable energy within the network, its capacity to chase wasteful power by aiming a fleet of mobile hardware that needs to consume energy to produce value (this helps unstrand, for example, natural gas that was going to be flared due to there being no productive economic use for it).

One interesting way to look at this is the use of Sichuan province for mining bitcoin — where the majority of Chinese miners who are in the People’s Republic of China do their mining. Sichuan suffers from overcapacity — an ambitious, centralized state-driven project led to the Three Gorges Dam and a glut of power that can’t find usage at optimal prices.

Instead of filling in the gaps with decades-long plans to fill in ghost cities commissioned by central planners, instead, a hyper-mobile fleet of hardware miners can come in and out and take advantage of excess power. Within the larger confines of the energy market, bitcoin mining can serve as a honing missile for inefficiencies, providing the imagined cities central planners thought they could conjure up when they set up building complex, and perhaps without bitcoin, projects that carry waste.

And this gets to exactly why these arguments against bitcoin miss the mark. “Waste” is an arbitrary term and is an economic analogue to those who in a political sense will define “terrorism” as a certain specifically defined kind of violence versus another. A state that kills a civilian is perpetuating justice — a non-state actor is committing terrorism. Similarly, if it contributes to a central planner’s ambition for GDP, it creates “value” — when it corresponds to networks of decentralized individuals defining and transacting in value elsewhere, it corresponds to “waste”.

In this sort of philosophical worldview, the key point of contention is definitions rather than technology. We have to get at the very idea of what makes something valuable or not to create meaningful headway. Without that, even a bitcoin network that uses 100% renewable energy or absorbs all of the energy waste in the world (energy that is literally destroyed with no purpose) will never satisfy the pointy barb and perspectives of its skeptics.

Value is defined imperfectly in terms of our current market economics — how does a trustless, decentralized system that stores value without top-down leadership fit into a world that is used to having bureaucracies govern top-down without question?

We have to compare bitcoin to what it is trying to supplement or complement. In fact, the inevitable result of low monetary policy targeting and the current financial system is an incredible asset bubble passed through the retail banking system through incredible promotions and offers, and incredible punishments for the idea of saving (at least in standard retail banks).

As asset prices increase across the board, from shares to housing, all we have changed is the multiple — the asset multiples assigned to power an arbitrary metric, in order to push forward rampant consumerism in the hope that eventually, these consumption multiples (all of which accelerate some degree of carbon emissions) will trickle down to steady waged jobs.

Some economists have softened on the idea of tradeoffs — content or mystified with a flattening Phillips curve that no longer turns employment into inflation in as straightforward as a way and a rate of growth that is higher than the real interest rate.

The idea now is to get an economy that shut down entirely because it wasn’t versatile enough to see a once in a 20 year phenomenon, something that Albert Camus had written about as an inevitable fact of life in his aptly named “The Plague” (“They fancied themselves free, and no one will ever be free so long as there are pestilences.”), back to life again in the most extreme fashion possible — with loose monetary policy and ample fiscal stimulus.

Yet, what are we getting for the bonuses paid for the financial captains of industry and increasing financialization (measured by financial sector % of GDP)?

What are we getting for the incredible asset inflation that is disproportionately rewarding those who are already wealthy, and leaving the working class, students, entrepreneurs and others at the very best poor in reality, rich in balance sheets — or poor in both?

What are we getting for a class of economic elites whose expertise does not seem well-suited in aggregate to predicting blowups in credit-default swaps and other exotic derivatives, private startup shares, or tail risk events such as plagues that are cyclical throughout the course of human history?

What are we getting for the relationship between political and economic elites, fed with political contributions? Can democracy function well with single-source contracts and a closed technocratic elite that rewards its members even as others sink below stagnation, buffeted with the promises of future cheques rather than future careers or independence?

What are getting from a system that rewarded the CEO of a bank whose role in Lehman Brothers helped foster incredible financial failure and worldwide recession with about $500mn in salary?

Are not all of these wasteful in some way or another?

Bitcoin is not just a wonkish deflationary “proof-of-work” system. It is a way to inject liquidity and a democratic, decentralized, and international desire to target the incredible amount of waste in the current financial system and economic-political complex that defines the modern nation-state.

At that, it is a welcoming one that rewards those who are intellectually honest, and which forgives a change of heart or those so tentative that they have become self-professed “latecomers” (Elon Musk). Bitcoin does not censor who joins the network, and some of its skeptics (Micheal Saylor for example) have become rewarded financially and socially for becoming some of its strongest advocates. Many financiers who are disillusioned with the current financial system have hedged their bets — or embarked on a wholesale adoption of bitcoin.

Since the early 2000s, in advanced developed countries, labour share of GDP has gone down (including in Canada, the United States, Germany, Australia, among others). The rich have gotten richer in places like the United States and in the People’s Republic of China— and this, not always through engineering new solutions or creating deflationary curves. Meanwhile, those working for wages are stagnating or worse, are seeing the potential for their savings to erode whether through government-based restrictions on their mobility (PRC’s Hukou), or the extreme difference in asset prices in developed equity markets, fed partly by tech stocks that have become a coterie of insiders before their IPO.

The explosive growth of bitcoin has not just been a story of those piling onto a deflationary asset to save themselves from a forced path of debt and lower wages. It has also been, in many ways, the story of the hidden costs of asset inflation that aren’t capture by the consumer price index — and the very story of what a society decides is valuable or wasteful. Arguments about bitcoin’s environmental impact and its “wastefulness” miss the mark entirely without considering the nuances contained in the idea of economic waste.

Seth Goldfarb
文章 342 篇
Seth is a Seattle-based freelancer writer. His work has been published in CryptoSlate, Hacker Noon, and other cryptocurrency industry publications. Seth also maintains a calendar of Seattle-area blockchain events at www.pnwblockchain.com.

Microsoft has no plans to make Tesla-like move into Bitcoin, says president

MakerDAO's Dai can now be spent anywhere in the U.K. that accepts Visa