The ongoing Bitcoin price correction draws a comparison with the March 2020 crash — with one big difference. 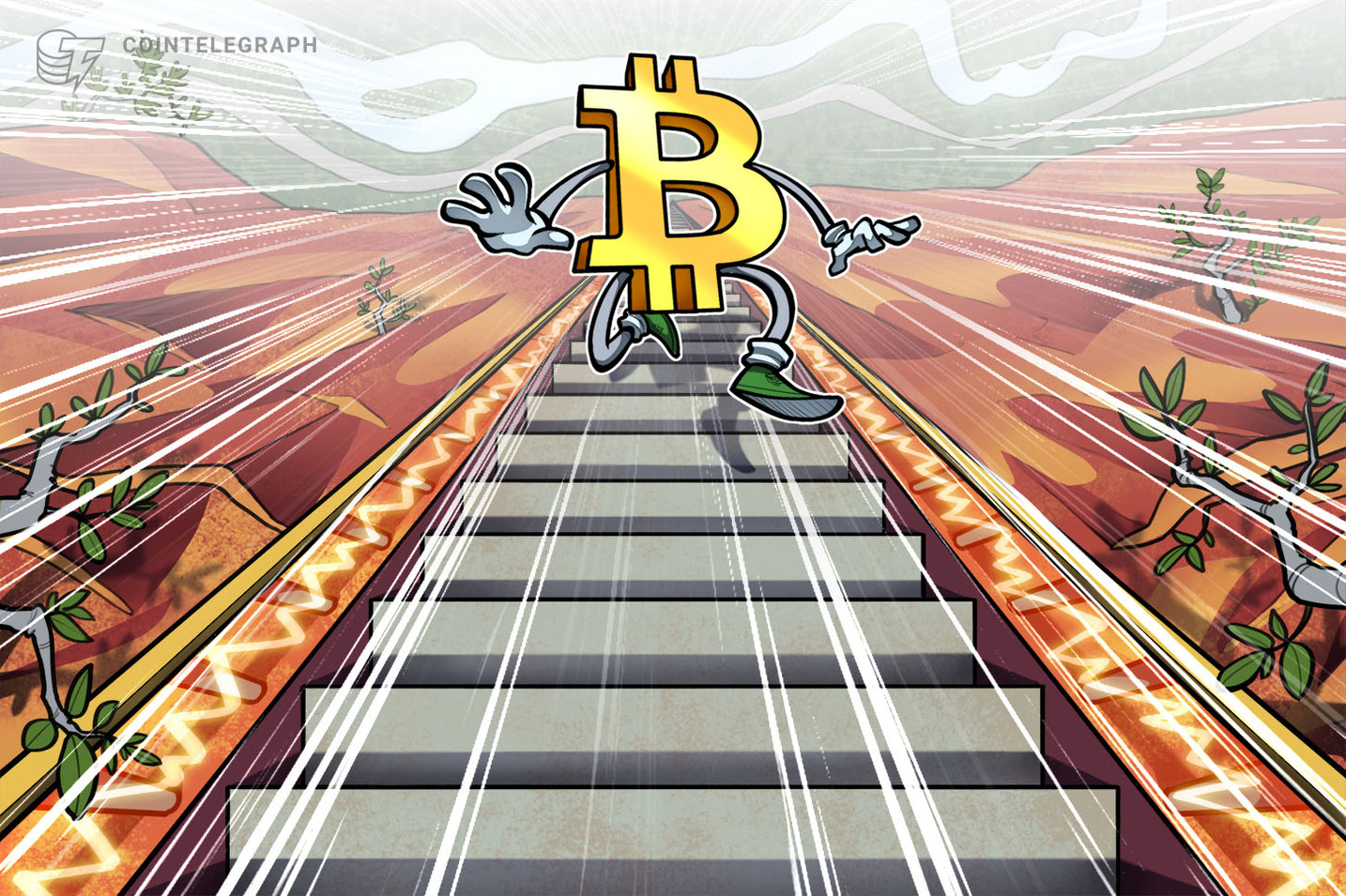 Elon Musk and COVID-19 have something in common: They have both panicked investors — at least once — into dumping their Bitcoin (BTC) holdings.

The similarities notched up higher in the previous six days as Musk doubled down on his chaos-inducing perspective toward Bitcoin. The billionaire entrepreneur engaged in a Twitter spat with top cryptocurrency advocates over the weekend, including podcaster Peter McCormick, as he projected his favorite token, Dogecoin (DOGE), as superior to Bitcoin.

At one point in time, Musk almost admitted that he would have Tesla unload the $1.5 billion investment that it had made in Bitcoin in February. Meanwhile, the bids for the flagship cryptocurrency kept on declining with each of Musk’s tweets. First, they went to $50,000, then sub-$45,000, eventually to bottom-out near $42,000.

Musk later clarified that Tesla has not dumped its bitcoin holdings.

To clarify speculation, Tesla has not sold any Bitcoin

But his clarification did little in offsetting Bitcoin’s downside bias. The cryptocurrency eventually extended its bearish correction to more than 35% when measured from its all-time high of nearly $65,000.

That also marked one of the quickest and deepest top-to-bottom retracement moves in the cryptocurrency’s recent history, with on-chain indicators showing that its impact on the market bias was as bad as the one caused by the Black Thursday crash in March 2020 in the wake of the coronavirus pandemic.

Meanwhile, blockchain analytics platform Glassnode reported a decline in the profits of Bitcoin’s circulating supply via its proprietary metric.

The “BTC Percent Supply in Profit (7d MA)” showed readings near 81.122 as of London morning on Tuesday, its lowest level since October 2020. The readings were also weak during the March 2020 crash, wherein Bitcoin declined by more than 50%. 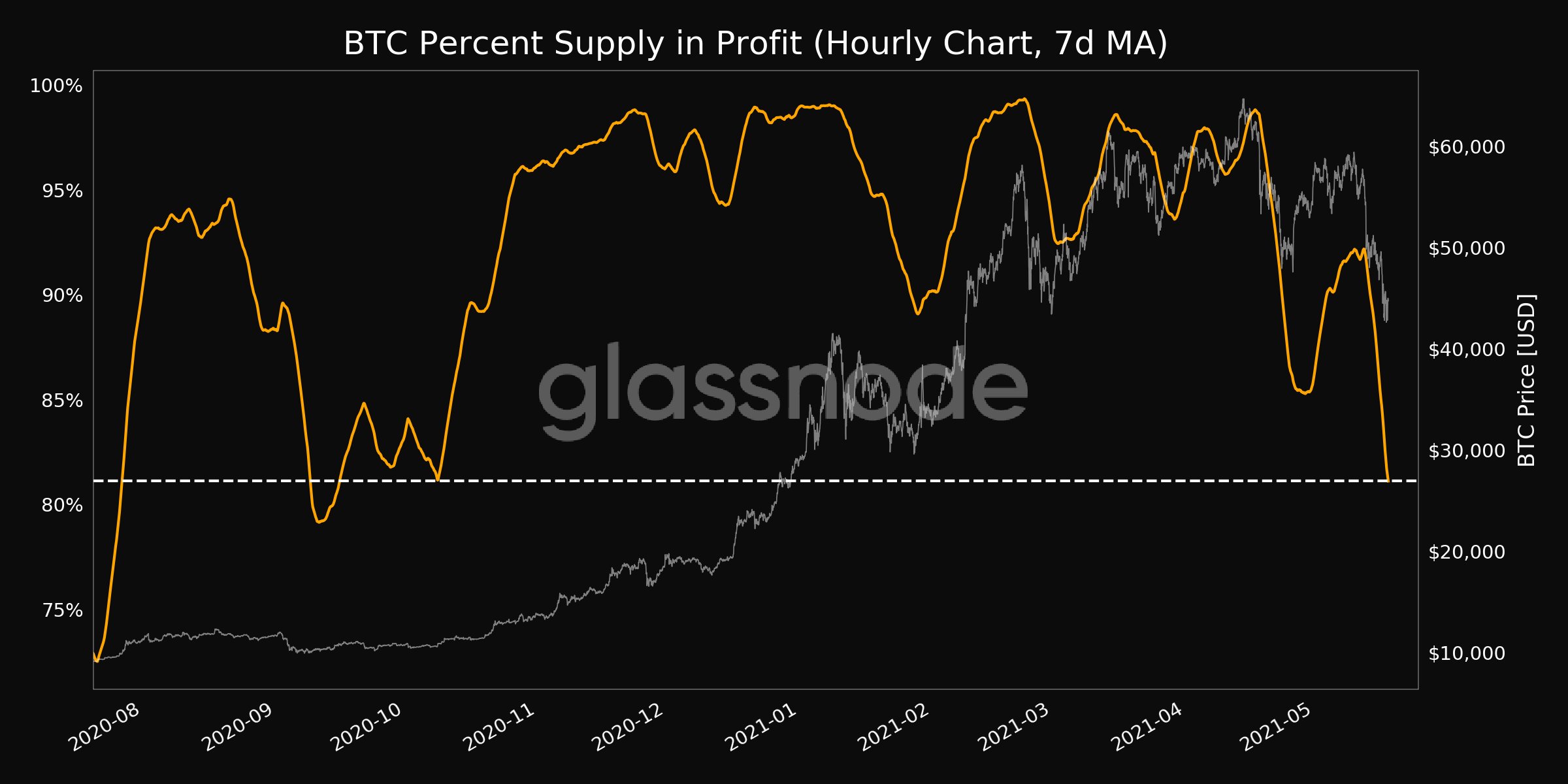 Percentage of circulating supply in profit on a 7-day average timeframe. Source: Glassnode

More on-chain indicators point out similar readings between the current, Musk-led Bitcoin price crash and the one that appeared amid the coronavirus panic in March 2020.

For instance, the Bitcoin transfer volume tracker at Glassnode showed a spike in BTC inflow across all the exchanges. Its scale was comparable to the inflows seen during the March 2020 sell-off and the distribution by the PlusToken Ponzi scheme in 2019. 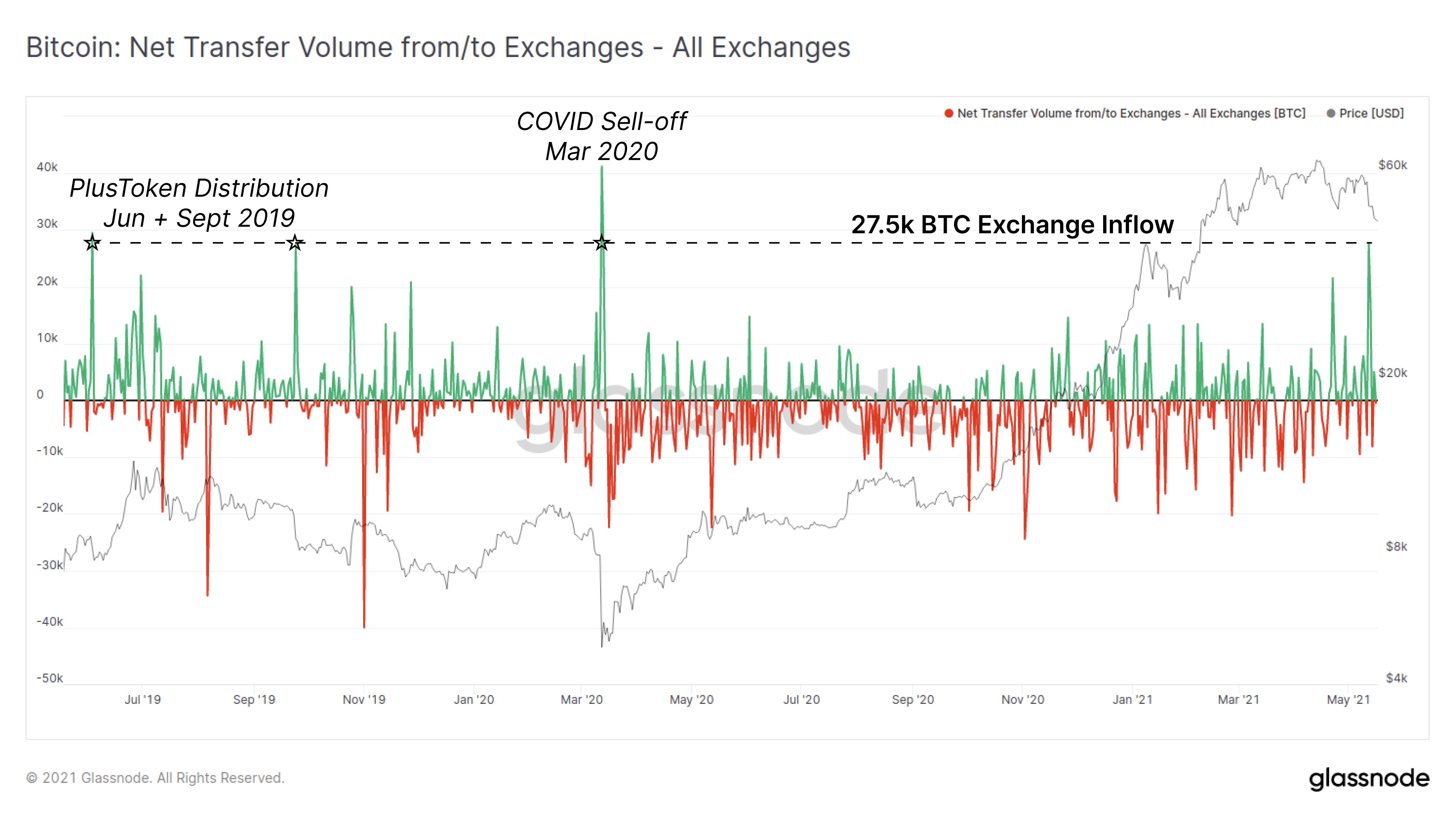 A higher BTC inflow indicates a higher probability of traders selling those tokens for other assets, including fiat and altcoins. Conversely, a higher outflow shows traders’ willingness to hold BTC for longer periods.

Glassnode’s Bitcoin transfer volume data, meanwhile, provided two stark investment perspectives between retail and institutions. In its weekly newsletter, the analytics platform broke down its observation based on the inflow/outflow data collected from two of the world’s largest cryptocurrency exchanges: Binance and Coinbase.

Binance is a non-United States entity that attracts mostly retail traders and investors around the world. Meanwhile, Coinbase’s standing is higher among U.S.-based institutional investors. Glassnode noted that Binance was the biggest receiver of the Bitcoin inflows during the Musk-led market crash.

“This provides further indication that the recent inflows are likely to be driven by both new market entrants (panic sellers) and potentially due to capital rotation into other crypto-assets,” wrote Glassnode in a weekly note.

Ki Young Ju, CEO of CryptoQuant — a South Korea-based blockchain analytics platform — also noted that most BTC inflows went to Binance, adding that it is not necessarily a bearish signal.

“I’m going to wait until the inflow signal cools off,” he added, nonetheless. 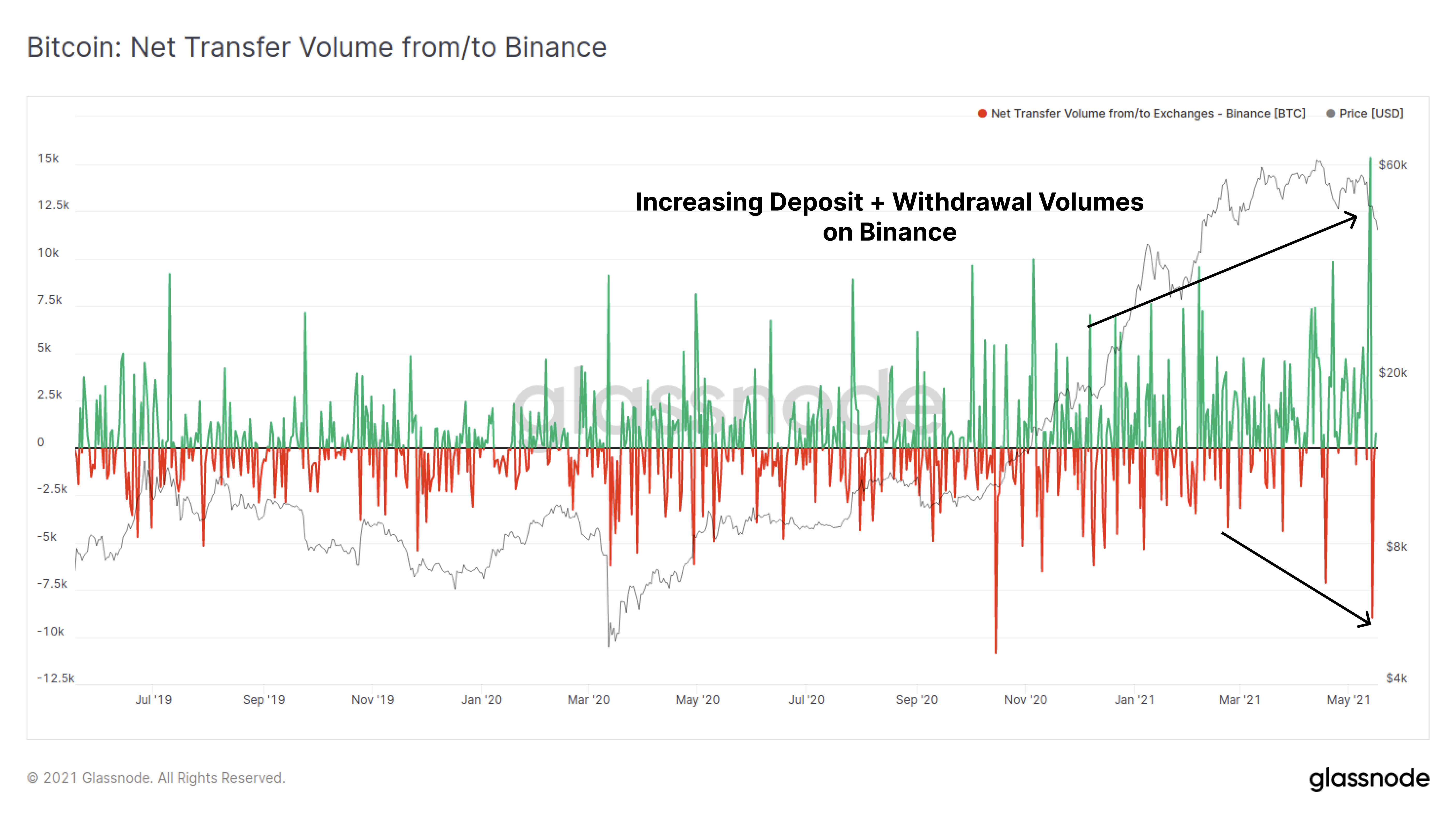 On the other hand, Coinbase has logged higher new Bitcoin outflows ever since the cryptocurrency broke above the $20,000-price milestone last year. The trend continued even in the current week, showing that institutional investors were absorbing the retail market’s selling pressure. 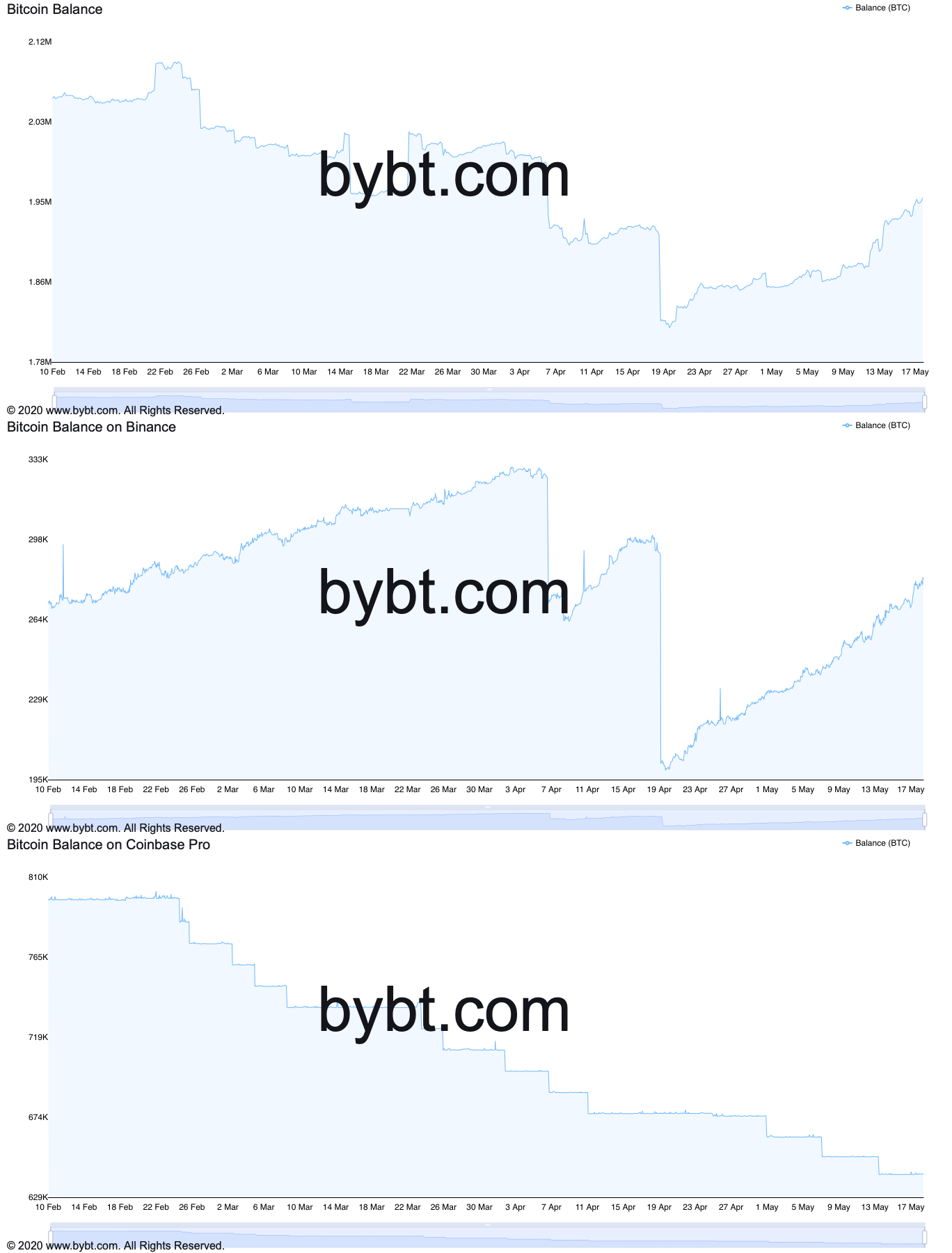 Bitcoin balance on all exchanges vs. Coinbase vs. Binance. Source: Bybt.com

In other words, rich investors purchased Bitcoin at local lows as average ones sold them under the influence of Musk.

“Don’t listen to what they say,” said early-stage investor Anthony Pompliano in his note to clients on Monday. He added:

“Just watch what they do with their money. Elon Musk and Tesla understand that they are going to be dependent on bitcoin moving forward. It wouldn’t surprise me if they are actually buying more bitcoin now at depressed prices or at least plan to purchase more in the future.”

The comments came in contrast to Musk’s support for Dogecoin. Veteran investor Paul Santos wrote in his Seeking Alpha piece that the Tesla CEO might want to make money out of thin air by exploiting the so-called cryptocurrency euphoria.

Kik CEO says company would not run ICO in U.S. again, and that's a "major shame"

Ting Peng
文章 219 篇
Ting comes from a political science background and is a former educator. She’s passionate about how Bitcoin and blockchain technology can empower people and help businesses transform in the new era. She has an entrepreneurial spirit and has joined several fintech startups since 2017. She speaks fluent Chinese, English, and Korean, and is currently based in Italy where she’s pursuing her dream to become a corporate communication specialist.

Anthony Scaramucci: “Trust” Is Going To Take Bitcoin To A Billion Users In 2025

Swedish Government Returns Over $1 Million in Bitcoin to Drug Dealer