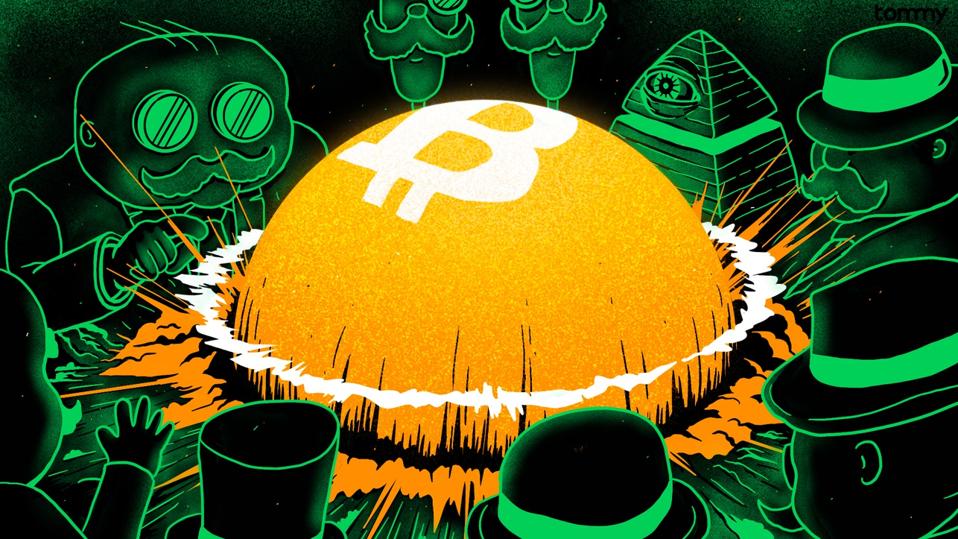 As 2021 begins, Bitcoin’s rising price has brought forth the usual commentary that has dogged the digital cash project for a decade – that it is little more than a “bubble” propelled by market manipulation and euphoria.

But for those who have spent years studying the phenomenon, the charts are the latest sign of a different reality, that Bitcoin, a genuine monetary invention, is outperforming government money in a natural free market competition.

In contrast to how you might see Bitcoin discussed elsewhere, the assertion of this article is that a body of evidence has emerged suggesting the software has created a real – albeit misunderstood – economy, and that this economy is establishing itself, if slowly, within the global monetary order.

Indeed, over the coming year, it appears likely that one of the biggest critiques against Bitcoin – that its price is irrational and speculative – will be proven inaccurate by data that better describes it as both cyclical and predictable.

If this possibility appears surprising at first, we only have to look back at the history of Bitcoin to examine the claim. In the wake of 2017’s market euphoria, skeptics and believers were split on a single question: how do we make sense of an asset whose value has ranged from zero to $20,000?

Both groups developed different hypotheses, and as the market cooled, they came to different conclusions for why the price was again declining.

To the mainstream, the answer was the simplest model. A rapid increase in new crypto assets and an increase in trading venues (some of dubious legal status) had again fueled a market overly driven by inexperienced investors.

Bitcoin enthusiasts took a skeptical stance to that conclusion. After all, there was a new monetary technology to reckon with, one whose economy was just over a decade old.

They asked different questions – How was it a price decline occurred again in spite of attention from investors and media? Why did its 2017 chart so resemble the “bubble” seen in 2013? And why did price declines in 2019 and 2020 stop at levels far higher than observed years earlier?

To answer these questions, a new hypothesis emerged: What if Bitcoin’s price “bubbles” are the product of its programming?

Bitcoin Is Not the Bitcoin Price

Understandably, the idea that Bitcoin might be the cause, not the effect, of its price booms and busts may require an initial suspension of disbelief. However, for the purpose of this article, I’d like to invite the reader to do just that as we walk through the basis for this conceit.

Let’s start with the obvious: Bitcoin has no price. That is to say, from the standpoint of the code, bitcoins are just finite pieces of data. It is the market of global buyers and sellers for that data that values and applies the “price” we commonly see quoted.

From here, we can see where the idea that speculative manias are the cause of Bitcoin’s price increases gets its roots. The market is always setting the price for bitcoins, so how is it that the Bitcoin software could impact this activity?

The answer lies in the programming of Bitcoin and how it defines the availability of bitcoins within its economy. As established in the code authored by Satoshi Nakamoto and released in 2009, Bitcoin has three qualities that distinguish it from nearly all other global economies.

Much attention of late has focused on the third value proposition.

In the wake of government intervention in markets in response to the COVID-19 pandemic, the mainstream has become interested in alternatives that shelter value from policy influence.

But to focus on the third quality is to focus on only part of the story. After all, no investor is going to buy any asset unless they are convinced they are doing so at a favorable price.

So, why are Wall Street investors taking another look at Bitcoin? Simply put, they are betting on the long-term impact of the first two properties of the Bitcoin software on its asset price.

Investors like Michael Saylor and Elon Musk are looking back at Bitcoin’s price history and they are seeing a pattern. They are betting on the idea the Bitcoin market will be volatile, yes, but they are also betting that it will be upward and cyclical.

Said another way, the Bitcoin price has created relative conditions of stability that allow them (and any investor) to plan for the future.

The Story the Charts Tell

Above we established the technical characteristics of Bitcoin, namely that it is a software technology, a claim on which both skeptics and critics largely agree.

This brings us to our next assertion: that Bitcoin’s asset price is influenced by the parameters of its code, and that this is the root of its extreme market fluctuations.

I’d like to note for critics that here is where our hypothesis enters some conjecture, though what follows is a thesis that takes into account nearly 12 years of observation.

As noted before, both believers and critics agree that the Bitcoin market has been defined by two periods of growth, the first in 2013 (when the price topped $1,200) and the second in 2017 (when the price surpassed $20,000).

The hypothesis adopted by critics (consciously or not) is that these were random, euphoric events comparable to this year’s GameStop GME and AMC manias. 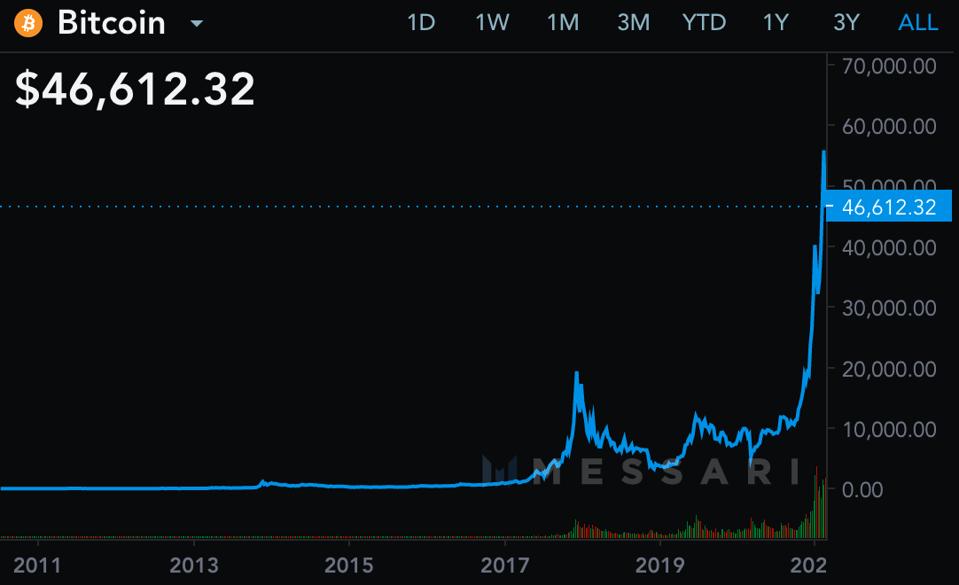 Less discussed is what would be a reasonable counter-proposal to that claim. Namely, how was it that in each case the Bitcoin price again rebounded to create the conditions described above? Why didn’t it just go to zero?

Certainly one can rule out euphoria. As admitted by Bloomberg, the Bitcoin price recently recovered back to all-time highs for a third time in history all while “no one was talking about it.”

A probable answer is that constraints in Bitcoin’s code provide the needed catalyst to reboot the Bitcoin economy. 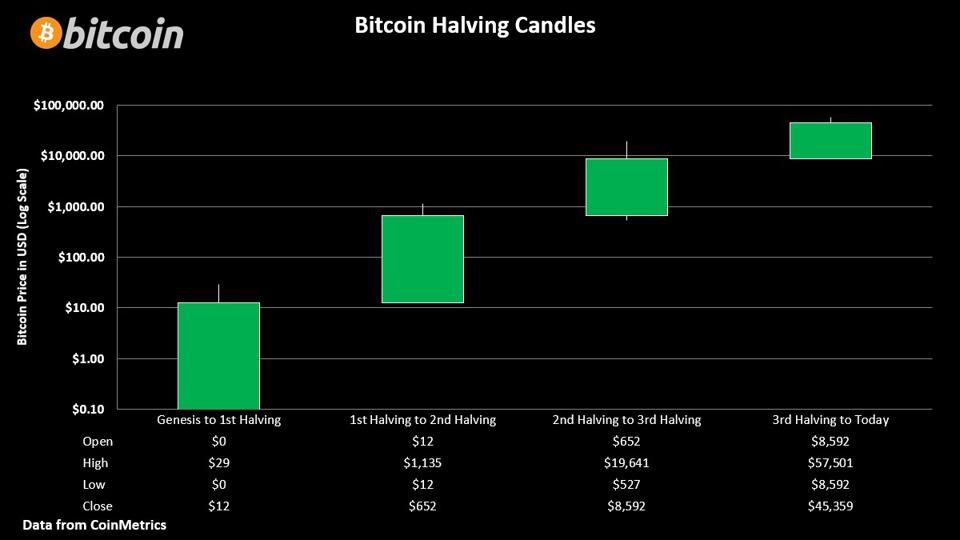 Bitcoin's performance during each of its four "halving cycles."

By reducing the supply of new Bitcoins minted on a four-year cadence, it appears the software is setting the conditions for a four-year boom-and-bust cycle.

Viewed through this lens, it’s possible the Bitcoin price isn’t random at all, but is instead a function of known parameters that can be understood as a pattern resulting from stimulus.

Every four years, the price rises to a new all-time high, after which it declines to near, but never falls below, a price set by the top of the previous four-year period. From there, the price rises steadily up and until the supply reduction, at which point changes to its supply cause the cycle to repeat.

If this pattern is to continue, we are about to enter a period where Bitcoin will soon hit new all-time highs for yet a third time, setting a price level that will then be followed by another four-year cycle of predictable performance. 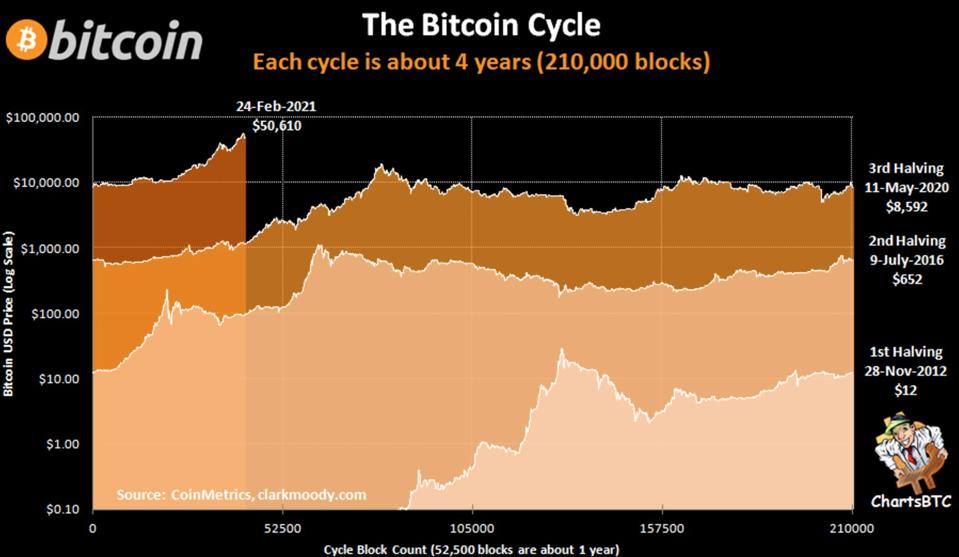 The price of Bitcoin in each of its "halving cycles."

You might be saying this all sounds interesting, but it remains predicated on future events. That reaction is understandable.

I personally refrained from buying Bitcoin until 2018 on the basis of the view that Bitcoin was a bubble (or that it would be replaced by some better technology), and I paid a penalty (spending more dollars to acquire Bitcoins later). You might, too.

All this is to say that what I am trying to introduce to this discussion is context that removes Bitcoin from the lens of traditional markets journalism. Bitcoin is not a stock, bond or government currency. It is an emergent scientific phenomena and it should be understood by applying the scientific method.

In that context, observers find themselves in the middle of two competing hypotheses. One defines the Bitcoin phenomena solely through the lens of external events, and continues to present a version of reality (that it will go to zero) that is at odds with 12 years of data.

The other has made allowances based on Bitcoin’s unique qualities and observable data. They argue that as the Bitcoin economy emerges, its asset price will rise, and that the true value of the Bitcoin system (and its asset) will be orders of magnitude above current levels.

We should note also that these two views can’t co-exist. One must be proved right, and the other proved wrong, owing to the fact that they are mutually opposed.

My belief is that in the coming months we will Bitcoin’s price rise to new highs. When we do, we’ll have to ask ourselves if a software that has created the conditions for three “bubbles,” each exactly four years apart, can be said to be creating “bubbles” at all.

If the Bitcoin economy isn’t a “bubble,” what else might burst?

Blockchain sports firm Chiliz to expand in US with $50M investment

Bitcoin Rebounds to $51K as Derivatives Market Cools Off