As Bitcoin Suddenly Surges Over $50,000, The Price Of These Cryptocurrency Stocks Is Soaring

Bitcoin's latest bull run has seen its price climb by almost 500% over the last year, charging back above $50,000 per bitcoin after a sell-off last week.

In February, the value of the 18.6 million bitcoin tokens in circulation passed $1 trillion for the first time—helping the wider cryptocurrency market climb to near $2 trillion.

As soaring bitcoin and cryptocurrency prices tempt users to the burgeoning market, share prices of many crypto businesses have risen too, with some far outpacing recent cryptocurrency rallies. 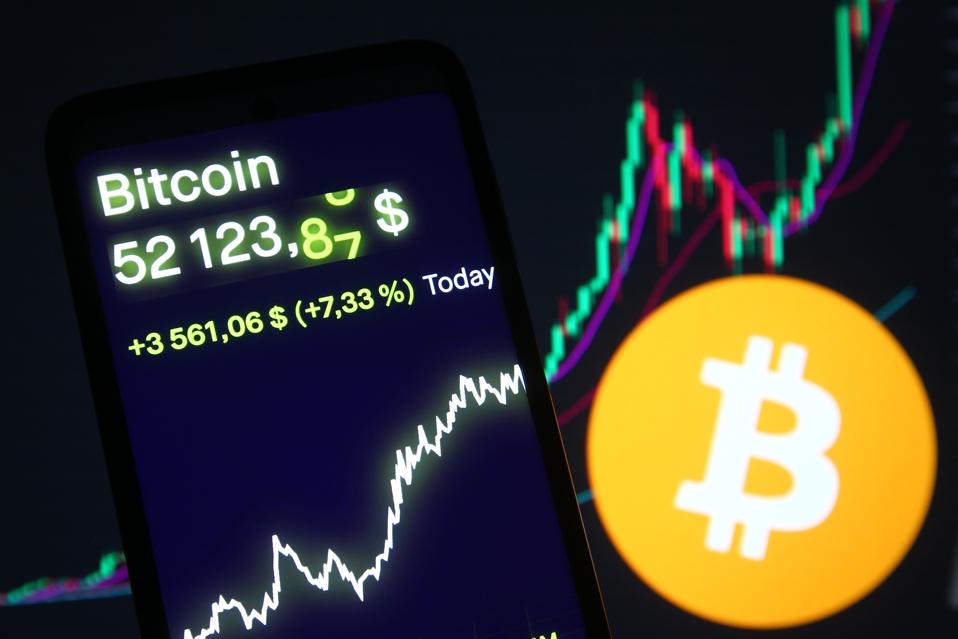 The bitcoin price has soared back above $50,000 per bitcoin this week after falling sharply last ... [+] week.

Over the last three months, the bitcoin price has climbed 150%, while some other major cryptocurrencies have recorded even bigger gains.

However, the share price of KR1—a London-listed digital asset investment company that was an early investor in soaring ethereum rival polkadot—has added a blistering 800% since early December.

"KR1 was set up to allow investors access to the crypto economy via a publically-listed company," says George McDonaugh, KR1 managing director, speaking over the phone. KR1 listed shares on the U.K.'s Aquis exchange in 2016 and has seen its stock price rise 33,000% since then.

"Cryptocurrency stocks are outperforming the underlying assets because of the infrastructure that allows people to invest in public stock, such as 401(k)s and ISAs," says McDonaugh. "If you can tax-wrapper something as explosive as crypto, that makes a lot of sense in a lot of investor's eyes."

According to McDonaugh, investors "are pricing in future management decisions, which makes KR1 slightly different from bitcoin mining stocks and the likes of Coinbase"—the San Francisco-based bitcoin and cryptocurrency exchange that's set become a publicly traded company worth around $100 billion through a direct listing (meaning it won't seek to raise additional funds). 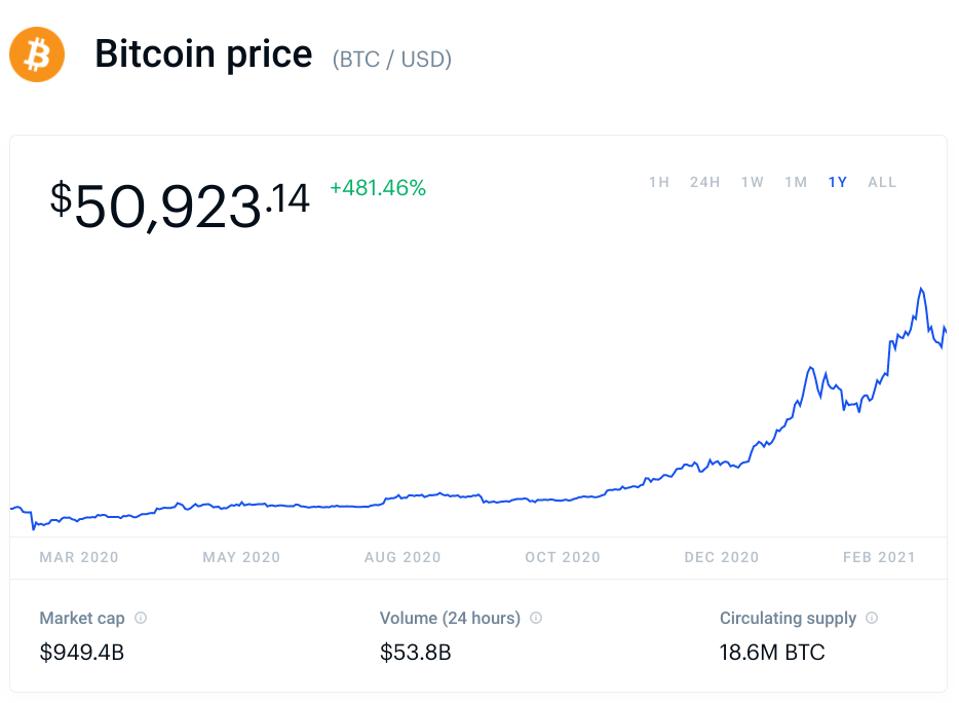 The bitcoin price has added a blistering near-500% over the last year, with some bitcoin and ... [+] cryptocurrency stocks climbing even higher.

Some bitcoin and cryptocurrency miner stocks have also soared in recent months. Las Vegas-based Marathon Digital Holdings, formerly Marathon Patent Group, is up 500% since early December, while Colorado-based Riot Blockchain is up 400%.

The share price of Shanghai-based The9, which develops and operates online and mobile games as well as blockchain services and bitcoin mining, has soared more than 1500% over the last three months, rocketing along with the surging bitcoin price.

"There could be every possible shade of despair if digital assets fall by 90% again," as they did through 2018, says McDonaugh, though he's quick to point out a silver lining.

"It will mean we can start allocating capital again. Right now we're riding the success of projects we bet on during the 2018-19 bear market. We need to make sure we're best positioned to take advantage of the tailwinds and we're able to work harder if we enter a slow down."

Ian Kane
文章 147 篇
Ian Kane is the co-founder and COO of Ternio, which provides white-label products that enable cryptocurrencies to interact with the existing financial system. Ternio’s BlockCard gives people the best way to use cryptocurrency for everyday purchases. Prior to Ternio, Ian worked in technology and digital media for over 10 years with a heavy focus on business development, sales and strategy.

As Bitcoin Suddenly Surges Over $50,000, The Price Of These Cryptocurrency Stocks Is Soaring

NYAG’s Probe of Bitfinex, Tether Ends in an $18.5M Settlement

What Is a Bitcoin ETF?