Bitcoin and cryptocurrencies—helped by meme-based dogecoin—have captured the attention of TikTok teens and billionaires alike in recent weeks.

As the bitcoin price has soared, breaking through the closely-watched $50,000 per bitcoin barrier, traders and social media influencers flocked to cryptocurrencies (encouraged by meme-master Elon Musk).

Now, some of those that have recently dipped their toes into the world of bitcoin and crypto are looking to take the plunge—with YouTube star Jake Paul discussing creating a cryptocurrency with fellow YouTuber Ben Phillips. 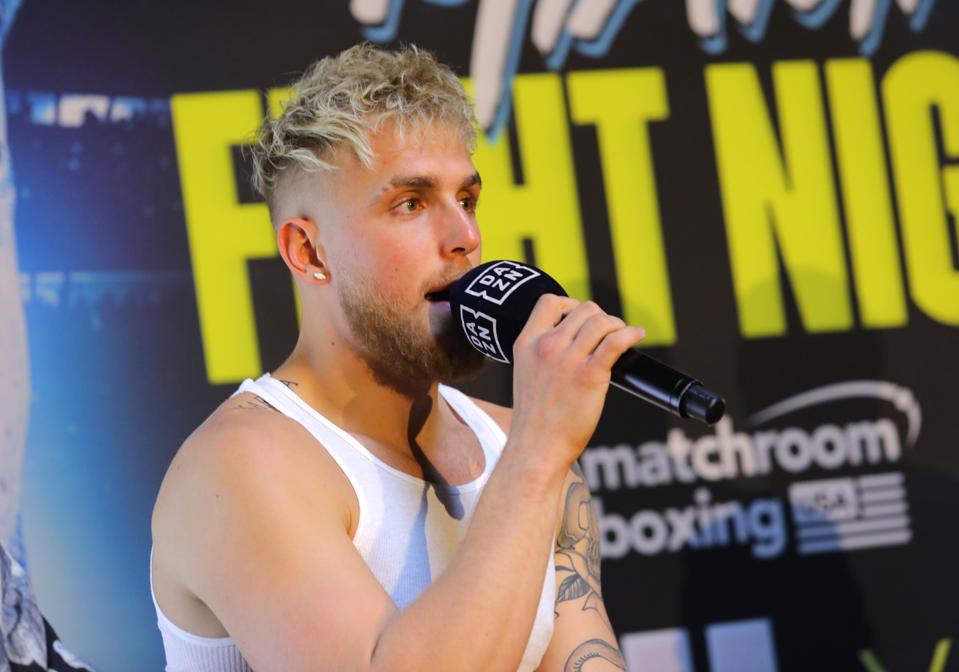 YouTuber Jake Paul, after turning his hand to boxing in recent years, has expressed an interest in ... [+] creating his own bitcoin-like cryptocurrency amid a surge in the value of meme-based crypto token dogecoin.

"It might happen, it might not," says Paul, speaking over the phone alongside Phillips. "It's a big undertaking. Ben and I have discussed it ... But definitely no jakepaulcoin. It would have to provide a purpose and be useful. We don't want to create something just to make money."

Paul and Phillips, who between them have over 8 billion views on YouTube, have both helped dogecoin—a cryptocurrency branded a "joke" by its creator—to reach a total value of $10 billion in recent weeks. But the pairs' interest in crypto goes beyond memecoins and get-rich-quick price pumps.

"[Crypto is] the future," says Paul, who calls bitcoin "the greatest investment" of his life. "I'm speaking with my friends constantly about it. We're just scratching the surface."

"[Dogecoin] is a great starting point, there's clearly interest," says Phillips, pointing to the tongue-in-cheek tweets about dogecoin from billionaire Elon Musk—who's electric car company Tesla recently revealed it had bought $1.5 billion worth of bitcoin—as evidence "there's some sense behind it."

"Away from the business side, how do you educate about [cryptocurrency]," Phillips asks. "Dogecoin is great for the community side."

"This generation likes fun, viral moments," adds Paul, who wants to use his wildly-popular platform to "help the younger generation understand" crypto.

"That's why you see dogecoin going crazy. I bought doge a year ago. Now Musk is tweeting about it."

The dogecoin price has surged by almost 500% over the last month, climbing as traders who were inspired by Reddit forum WallStreetBets' run on Gamestop GME shares piled into the cryptocurrency. 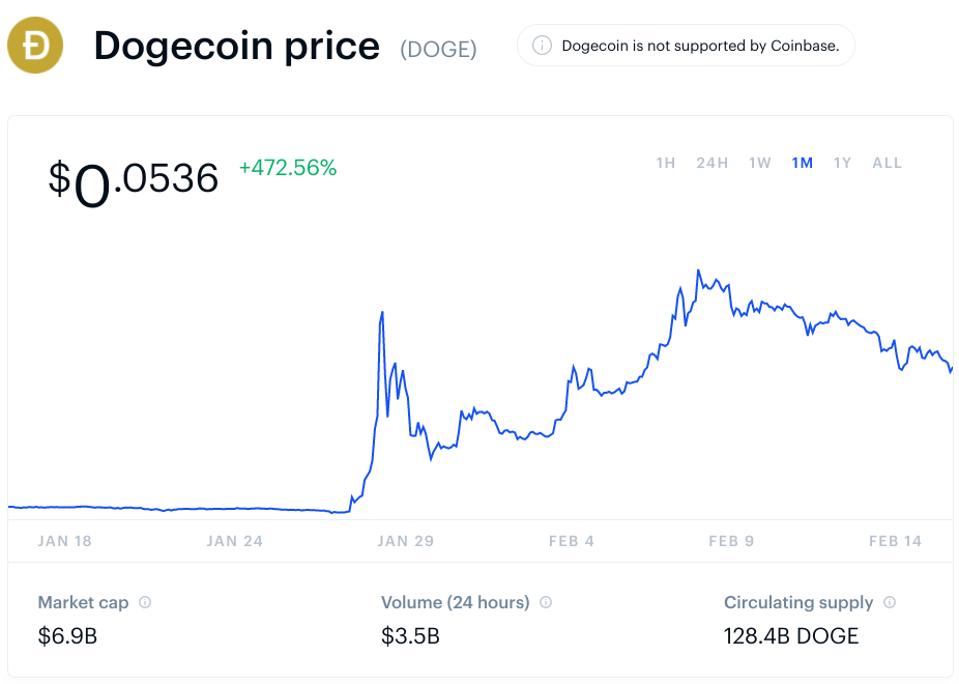 The dogecoin price has surged higher in recent weeks, climbing alongside the bitcoin price.

Paul and Phillips own a handful of different cryptocurrencies between them, including bitcoin, ethereum, chainlink, pokadot, XRP, the relatively small sia, and, of course, dogecoin.

While Paul proudly boasts he first bought bitcoin eight years ago when he was just 16, when the price of bitcoin was trading under $100, he admits he's "not an expert in the space" and has "a lot of room to grow."

Bitcoin was created by the mysterious Satoshi Nakamoto in 2009 and caught on among those in cryptographic and financial technology circles before exploding into the mainstream in 2017 when its price ballooned to around $20,000, only to crash back to $3,000 in 2018.

Amid the bitcoin mania of late 2017, celebrities and influencers were quick to try to jump on the cryptocurrency bandwagon. The likes of DJ Khaled, actor Steven Seagal, boxer Floyd Mayweather and heiress Paris Hilton were all talking up various cryptocurrencies, most of which have now collapsed into nothing. As a result, regulators have come down hard on projects using cryptocurrency technology to raise money outside of traditional channels.

Recently, rapper Soulja Boy was warned the Securities and Exchange Commission (SEC) may not look kindly on his impromptu plan to create "souljacoin."

However, the bitcoin and cryptocurrency space has somewhat matured since the heady days of 2017. Wall Street has begun to embrace the technology, investors are throwing their weight behind it, and it's potential uses are being explored in new ways—including how to tokenize creators without offending the SEC.

"There's value in communities on the internet that isn't quite being fully realised," says Jess Sloss, the founder of social token incubator Seed Club, speaking over the phone. "We're working with lawyers to chart a path that can be less risky. There's a lot of risk for a big artist to come and experiment here because the route isn't clear, but as soon as it is, there will be a rush."

According to Sloss, creators looking to make their own cryptocurrency should aim for a "hybrid model" that gives some sort of ownership and that also creates some sort of value, such as offering a subscription.

"[Seed Club] wants to structure our projects with community ownership and governance protocols that benefit fans."

Meanwhile, those who grew up with the internet being part of their lives intuitively see crypto as an inevitable part of the future.

"Everything in our society is advancing more quickly," says Paul, referencing the boom in digital services that's come as a result of the coronavirus pandemic and lockdowns put it place to contain it.

"But [crypto adoption] was inevitable. I check [prices] all the time. It's like playing a video game almost."

Helen Partz
文章 435 篇
Helen is passionate about learning languages, cultures and the Internet. She has years of experience working at international online advertising projects. Growing interested in Bitcoin and cryptocurrencies in late 2017, she joined Cointelegraph as a writer.

What Happens if All Stablecoin Users Have to Be Identified?

DEXs becoming unusable? How to navigate record gas fees ahead of Eth2