The Financial Times is often the go-to for many when it comes to the latest business and economic news. But at £33 per month for a standard digital subscription, it certainly isn’t cheap. While many consider this subscription model to be terrific value for money, others don’t use the site anywhere near enough to consider paying a flat monthly subscription.

The FT, and many other sites like them, are essentially leaving money on the table if visitors don’t want to sign up to the “all or nothing” subscription model and there is no mechanism in place to capitalise on the “occasional” user. But with digital identities and micropayments, things could change.

Whilst it could be argued that the news and information services market is thriving, subscription fatigue has been looming for years. The New York Times, for instance, recently reported it has more than 7.5m paying readers. And, earlier this month, Dow Jones announced it has seen its highest ever year-on-year growth in total subscriptions for its consumer products, with The Wall Street Journal growing by almost a fifth to reach a record 4m. But the same cannot be said for most news sites. According to a report by Juniper Research, there’s a real danger that the sheer volume of subscription-based content could lead to subscriber fatigue. Consumer behaviour also shows that many people only adopt a new subscription by dropping another, it’s for this very reason that new models will be needed.

You only need to look at the recent controversy over the BBC television licence fee in Britain (one of the oldest content subscription methods), to see the model is broken. Senior citizens are now actively rebelling against paying the yearly cost of a subscription that is enforced by the government. Their complaint is that the content being produced by the BBC isn’t as appealing to them. So why not combat this issue by offering them a pay-as-you-go micropayments option instead? Where they only pay for what they actually consume. Surely this is a preferred option than following the lead of other “free to air” channels in going down the advertising route?

What if there was another way? Well, it’s beginning to look like there is. An all-encompassing and unique digital ID, powered by blockchain and tied to a single individual's biometric data, like a fingerprint, could become part of a brand new model that would save consumers and providers both money and time. This could become possible with the implementation of micro-payments. Instead of a blanket subscription service that costs the same no matter how you use it, this digital ID would be charged anytime you, say, accessed an article or watched a movie. This ID would be universal and tied to a primary user-funded wallet.

If implemented correctly, this model could strike the balance between giving customers easy, instant access to their preferred content while helping media providers monetise all their content. Pricing could be scaled so that all but the most prolific users would be paying less than they would with a flat subscription fee.

It isn’t hard to imagine how tying such a model to a digital identity could bring payments across virtually every type of platform under one roof. Users wouldn't have ten different subscription fees every month, but instead, their fees would reflect precisely what services they have used. There would no longer be “paywalls” that block off so much of the internet, but instead, microtransactions would take place almost seamlessly in the background as these platforms are accessed.

The Transport for London (TFL) system is a brilliant example of a real-world application of this model. A single card (or device) can be used to access virtually any form of public transportation across the Capital. With a “pay as you go” cap implemented, this means that once you’ve hit the cap, users are rewarded with “free” journeys on a daily or weekly basis.

Now imagine you are consuming content on the internet. Flicking through Google News, Flipboard and inadvertently reading more than your free share of FT articles, now, instead of being cut off from accessing any more content, or being offered another eye-watering subscription that you’re never going to use enough, you automatically get a micropayment price offered, with incentives tied-to consumption - such as an unlimited period of access once you’ve reached your pay-as-you-go “cap”. 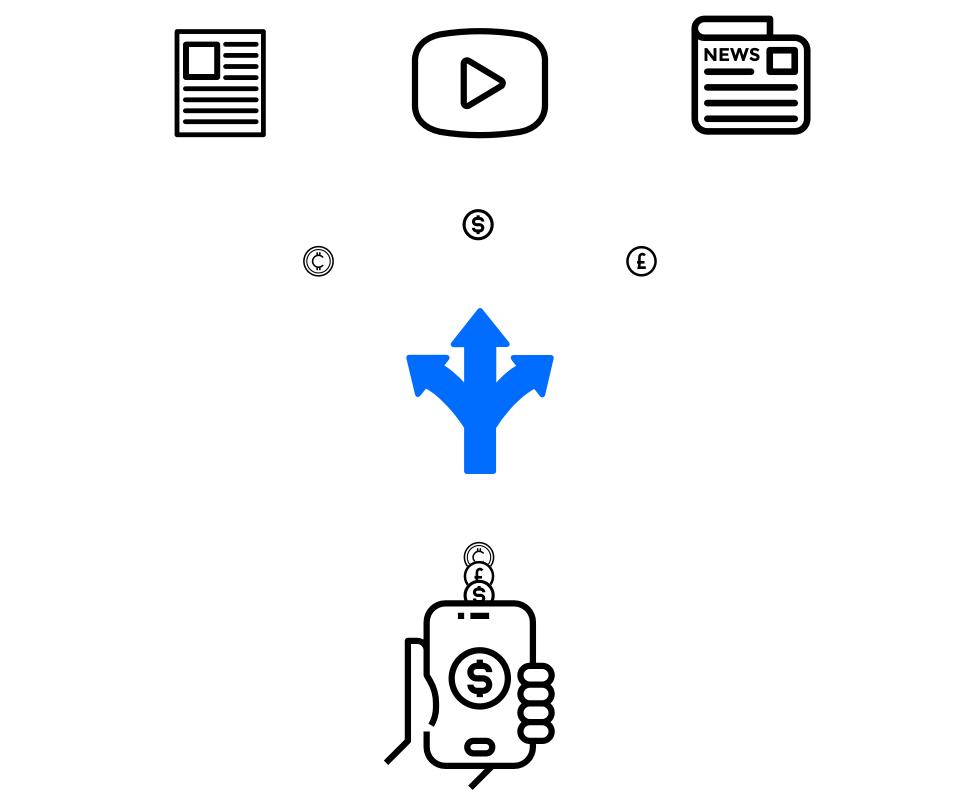 Digital IDs could help bring payments across virtually all platforms under one roof.

There’s one more bonus to touch on here, which is the potential for content-driven advertising. For those publishers that don’t operate a subscription model, they are instead monetising their content by employing an advertisement-led system in some form. Whilst ads often help keep costs low for consumers, they are intrusive, create friction for users when trying to access content, and worse, are tracking you and your browsing history. Many people are becoming quite savvy to this, and opting to upgrade to a premium, “ad-free” package, but it is also likely still driving some customers away. That isn’t the only problem with using current advertising models to monetise your content.

Brands are starting to come to the realisation that this type of advertising does not deliver ROI, which means it’s unlikely to sustain this model for much longer. Multiple major brands such as Procter & Gamble, Chase, and Uber have all reduced their advertising. In some cases, by as much as 99%. The result? Virtually no change in their revenue. This implies that at least in some instances, advertising is a literal waste of money, at least as far as it pertains to sales.

Instead, basing it around a digital identity rather than a device would allow for frictionless access across platforms and devices. Further, advertising could also be adapted from the current “free-for-all” system and more focused on benefiting both the users and the publishers via content-driven ads.

This would allow users to set specific preference choices ahead of time on what information is collected and have more control over other factors. As opposed to today’s model, where users are bombarded with privacy panels, which are hastily clicked to allow access. Probably allowing more tracking and misuse of data than had previously been the case before the privacy panel had arrived. While there are certain projects, including the Brave browser, which compensates users for opting into advertising or data collection, there’s an audience out there who simply want no part of that type of trade-off.

They would rather pay for access to content by way of micropayments and completely bypass the data tracking aspect altogether, and be able to do so via any number of devices and browsers. There’s even the potential of compensating participants who opt in to advertising or data collection.

Ultimately, convenient, cross-platform payments appear to be the way of the future, acting to complement the already-prevalent flat-fee subscription model, but enabling publishers to think about next-gen monetisation methods once subscriber fatigue begins to bite.

Further, there’s still a sizable audience out there that doesn’t fit within this model, but until businesses realise they’re ignoring customers who are willing to pay for another way to access their content, it will always be a flawed approach.