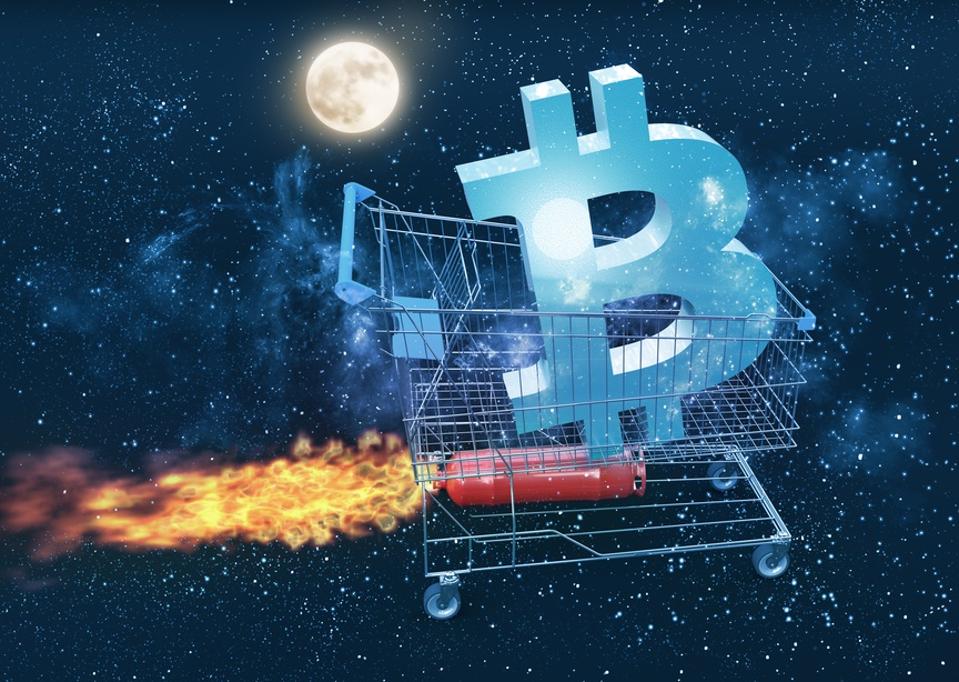 "Bitcoin moon" or "Bitcoin to the moon" has been a favorite saying of BTC fans for years. Now, they ... [+] are watching liftoff, thanks to institutional investor adoption, and new ETFs making it easier for retail traders to buy.

Finally, Bitcoin has liftoff. Guys in the market were predicting Bitcoin $50,000 in early January. We’re there. Now what? Is it worth chasing?

Nothing is worth chasing if you’re investing money you cannot afford to lose, of course. Otherwise, take Jim Cramer and Elon Musk’s advice. Buy at least some Bitcoin. Even if that means buying the Grayscale Bitcoin Trust (GBTC), which is the easiest way in and beats setting up those annoying crypto wallets with passwords as long as this sentence.

So the answer to the headline is this: using the old school method of dollar cost average, put $50 or $100 or $1,000, whatever you can live without, into Grayscale Bitcoin Trust. Open a cryptocurrency account with Coinbase or a financial advisory if you’ve got more money to play with. Bitcoin might not go to the moon, wherever the metaphorical Bitcoin moon is (is it $100,000? Is it $1 million?), but it’s an asset worth owning now and pretty much everyone on Wall Street recognizes this.

“Once you understand the basics, you’ll see that adding digital assets to your portfolio is one of the most critical investment decisions you’ll ever make,” says Jahon Jamali, CEO of Sarson Funds, a cryptocurrency investment firm based in Indianapolis. 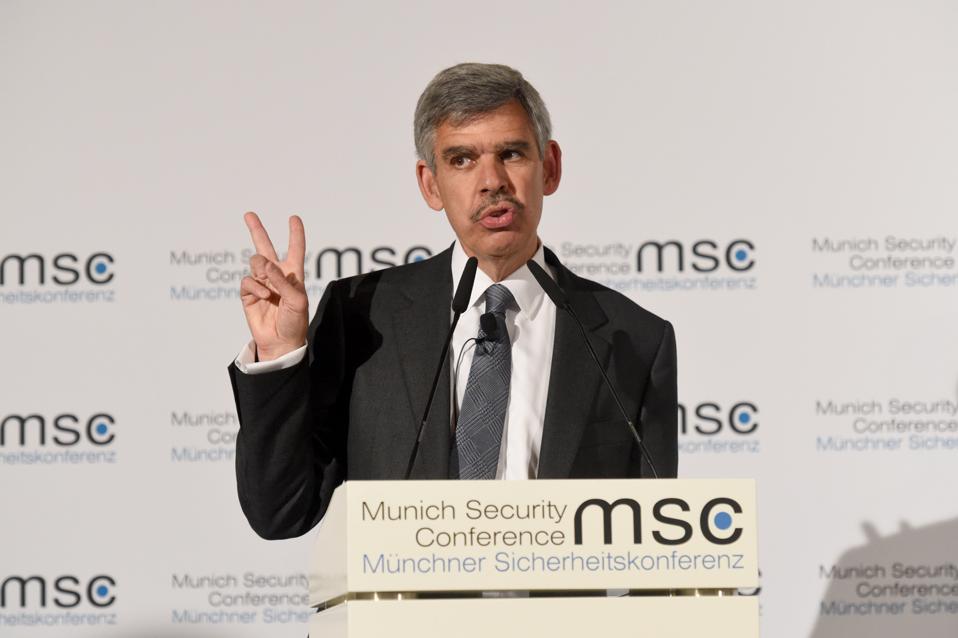 Mohamed Aly El-Erian, Allianz advisor. Peace out, Bitcoin. It's almost like gold now, he says. ... [+] Institutional investors have been saying this for at least two years now. Photo: Felix Hörhager/dpa

dpa/picture alliance via Getty Images MORE FOR YOU

‘Ethereum Killer’ Polkadot: What’s So Great About It, And Why Buy It?

Allianz’s chief economic advisor, Mohamed El-Erian, said on CNBC on February 11 that the argument for investing in Bitcoin has reached a pivot point.

“Yes, we are in bubble territory, but it is rational because of all this liquidity,” he says. “Part of gold is going into Bitcoin. Gold is no longer seen as the only defensive vehicle.”

Wealthy individual investors, as well as corporate investors, are doing quite well in the securities markets. This means they are making millions in gains. Crypto investors are doing even better. Some are cashing out and buying hard assets — like real estate. There is money everywhere. This bodes well for all securities, even in the middle of a pandemic (or the tail end of the pandemic if you want to be hopeful about it).

Last year was the year of many unprecedented global events, namely the worst pandemic since the Spanish Flu of 1918. Some 2 million people died in less than 12 months from a single, mysterious virus of unknown origin. Yet, markets ignored it all thanks to stimulus.

The initial shocks from last February and March had investors recalling the Great Recession of 2008-09. They saw depressed prices as an unmissable buying opportunity. They piled in. 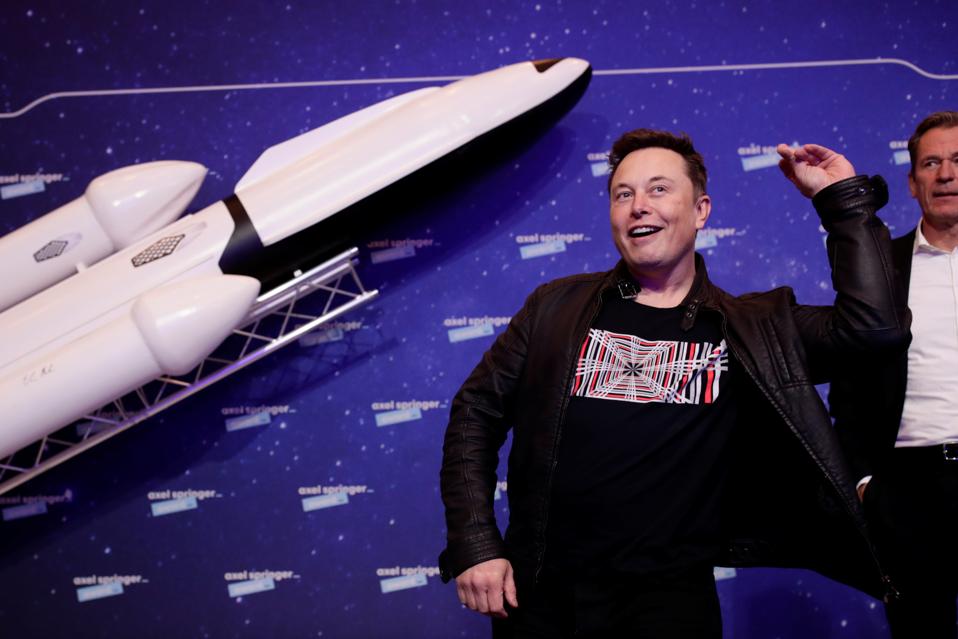 Elon Musk's Bitcoin Moon rocket? The Tesla CEO has pushed up the value of Bitcoin over the last ... [+] month and obscure alternative coins like Dogecoin. (Photo by Hannibal Hanschke-Pool/Getty Images)

Some of this was quite public, like Tesla TSLA spending over $1 billion to hold Bitcoin in its corporate treasury account. In December, Massachusetts Mutual Life Insurance revealed that it made a $100 million investment in Bitcoin, as well as taking a $5 million equity stake in NYDIG, an institutional crypto shop with $2.3 billion under management.

But a lot of these moves by corporates were not publicized, notes investors from Halcyon Global Opportunities in Moscow.

Fidelity now estimates that 40-50% of Bitcoin holders are institutions. Into the Block also shows evidence of this, with large transactions (over $100,000) now averaging over 20,000 per day, up from 6,000 to 9,000 transactions of that size per day at the beginning of the year.

Much of this is thanks to the increasing institutional-level infrastructure available to professional investment firms, including Fidelity Digital Assets custody solutions.

Institutional investors counted for 86% of flows into Grayscale’s ETF, as well as 93% of all fourth quarter inflows. “This in spite of the fact that Grayscale’s premium to BTC price was as high as 33% in 2020. Institutions without a pathway to owning BTC were willing to pay 33% more than they would pay to simply purchase and hold BTC in a cryptocurrency wallet,” says Daniel Wolfe, fund manager for Halcyon’s Simoleon Long Term Value Fund.

The market as a whole has also shown solid performance during 2021 so far with a total capitalization of crypto hitting $1 trillion.

Roughly every four years, the reward for Bitcoin miners is reduced by 50%. On May 11, the reward for BTC miners “halved”, thus reducing the daily supply of new coins from 1,800 to 900. This was the third halving. Each of the first two halvings led to sustained increases in the price of Bitcoin as supply shrinks.

Bitcoin was created with a fixed supply to generate appreciation against what its creators deemed the inevitable devaluation of fiat currencies. The recent rapid appreciation in Bitcoin and other major crypto assets is likely driven by the massive increase in money supply in the U.S. and other places, says Wolfe.

The Federal Reserve reported that 35% of the dollars in circulation were printed in 2020 alone. Sustained increases in the value of Bitcoin against the dollar and other currencies stem, in part, from the unprecedented issuance of fiat currency to fight the economic devastation caused by Covid-19 lockdowns.

The ‘Store of Value’ Argument

For years, investment firms like Goldman Sachs GS have been likening Bitcoin to digital gold.

Ezekiel Chew, founder of Asiaforexmentor.com, a renowned cryptocurrency trader and investor from Singapore, says that for the moment, Bitcoin is serving as “a digital safe haven” and seen as a valuable investment to everybody.

“There might be some investors who will still be reluctant to spend their cryptos and choose to hold them instead,” he says, meaning there are more buyers than sellers out there.

“The growth journey of Bitcoin and other cryptos is still seen to be at the beginning to some,” Chew says.

We are now at moon launch. Here is the last three months of crypto madness, a lot of it caused by Musk’s Twitter feed. Grayscale is clobbering Tesla, once seen as the Bitcoin of traditional stocks.

Tesla vs. Grayscale Bitcoin, the S&P 500 and the iShares MSCI Emerging Markets ETF.

“Bitcoin is becoming increasingly important for diversifying assets,” says Yulong Liu, managing director of global partnerships at Babel Finance in Hong Kong. “We have received many inquiries from individual investors and friends asking us about how they can buy Bitcoin once the price passed $50,000,” he says.

Babel has three main business sectors: lending, asset management, and prime financing. The amount of financing they provided to their clients, which are mostly trading funds and institutions, rose by a massive 900% in the last three months and reached $150 million at the end of Jan. 2021. The total number of institutional clients they’ve served has increased from 10 to 90. “Note that we don’t offer any fiat-based financial services,” he said.

Based on sentiment surveys, the overall investing climate looks good.

Investors surveyed by BCG say they expect the market low in the S&P 500 to happen in the second quarter of this year. That is right around the corner. To them, a roughly 500 point dip from where we are now means a second quarter 2021 low of 3,468. They then see it rising to nearly 4,500 over three years, based on survey responses.

If Bitcoin follows similar sentiment, we could be in for a cooling soon. But after that, if BCG’s stock market outlook correlates with crypto, then the moon landing is still scheduled for Bitcoin.