On Thursday, February 25, the Subcommittee on National Security, International Development, and Monetary Policy is holding a hearing called, “Dollars Against Democracy: Domestic Terrorist Financing in the Aftermath of Insurrection”. A Committee Memorandum on the upcoming hearing describes how 9/11 focused the U.S. on dismantling foreign terror threats, but that the right to privacy for U.S. citizens impedes the ability to follow the flows of money that may be used to fund extremists looking to incite insurrection.

“As scrutiny by traditional banks and payment platforms increases, extremists are turning to solicitations of cryptocurrencies. The rise is commensurate with the overall increase in cryptocurrency’s popularity...” cites a Committee Memorandum that expresses other potential illicit finance avenues such as crowdfunding, charities, and social media platforms.

“While there have been some high-profile, high value transfers to known alt-right cryptocurrency “wallets” (e.g., a post-death transfer of over $500,000 in Bitcoin from a suicidal French extremist to a number of US-based, extremist-owned wallets),” the Committee Memo notes it is unknown if digital currency was used to fund the insurrection at the Capitol in January. A report by blockchain analysis firm Chainalysis showed how, “on December 8, 2020, a donor sent 28.15 BTC — worth approximately $522,000 at the time of transfer — to 22 separate addresses in a single transaction.” The report went on to note that, “Many of those addresses belong to far-right activists and internet personalities,” including that of Nick Fuentes. 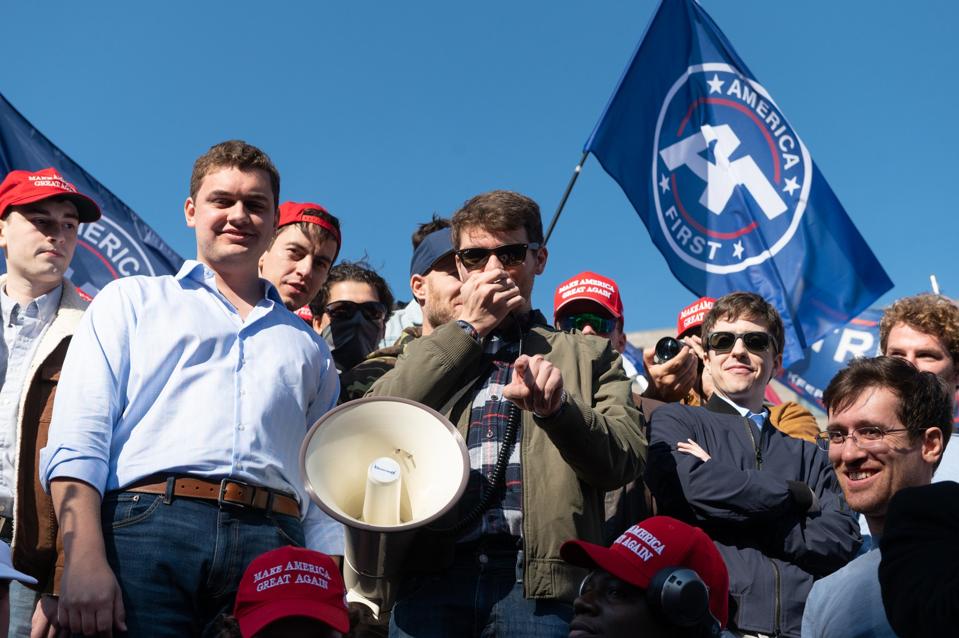 Nick Fuentes, the leader of a Christian based extremist white nationalist group speaks to his ... [+] followers, 'the Groypers.' in Washington D.C. on November 14, 2020 (Photo by Zach D Roberts/NurPhoto via Getty Images)

According to Chainalysis, the amount of Bitcoin received by Fuentes was over $250,000. Previous to this, the most Fuentes received was $2,707 in Bitcoin. While other donors received large amounts as well from the ‘suicidal French extremist’ and Fuentes has denied being inside the Capitol during the insurrection although he was there that day, these actions have been enough to put cryptocurrency on the radar of Congress as evidenced by the Committee’s Memo on the hearing. 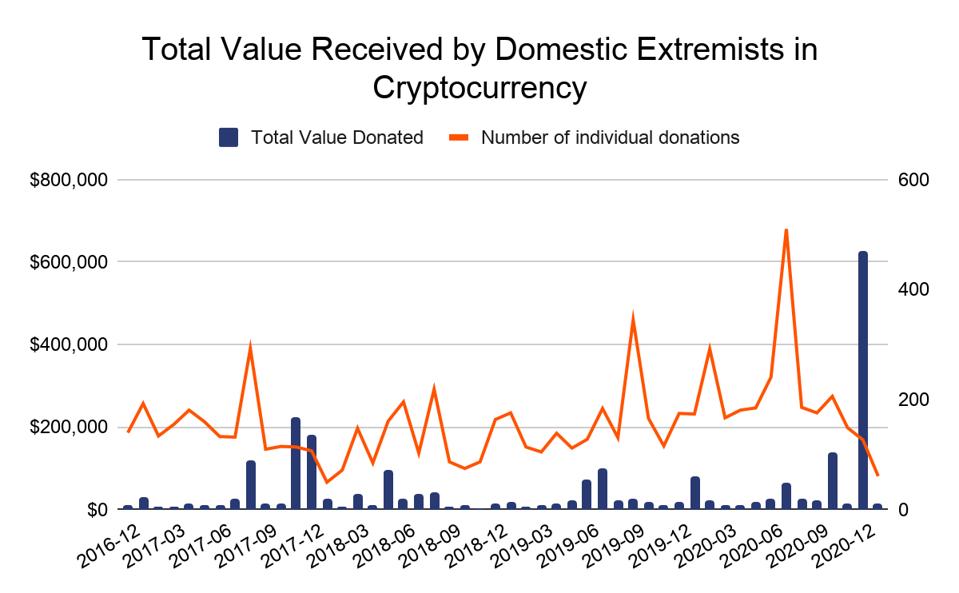 Chart from a blog by Chainalysis that indicates the amount of value in cryptocurrency received by ... [+] domestic extremists over the last four years.

Chainalysis MORE FOR YOU

Although unknown whether Bitcoin was directly used to fund the insurrection, the Committee Memo notes that, “Nonetheless, since it is increasingly common to find cryptocurrency wallet addresses listed on extremist websites, this is a potential and growing source of funds for domestic extremists.”

While 9/11 provided a focus on deterring foreign terrorist actors, it is clear that Congress - of whom its Members were put in direct jeopardy as a result of the riots on January 6, 2021 - is now looking for ways to deter domestic terrorism. With the price of bitcoin, albeit with fits and starts yesterday, has hit all-time highs above $50,000 for the first time ever this year, cryptocurrency has become a target in what is an extremely personal and emotional issue for many in Congress.

The memo also explains how it sees privacy rights in America as an obstacle to deterring domestic terror such as the insurrection of January 6th similar to how foreign terrorists have been stifled economically since 9/11. The Committee notes that, “...due to privacy rights and civil liberties and because “domestic terrorism” is not a chargeable federal crime, the bounds of domestic terrorism investigations are strictly limited.”

The Committee believes that since some of the arrests related to the January 6th attack were the result of traditional financial reporting of suspicious activities, that future insurrectionists will turn to non-traditional forms of finance for their activities. Other areas of focus by the Committee will include the use of crowdfunding, charities, and income from social media posts.

Congressman Jim Himes (D-CT) is the Chairperson of the Subcommittee on National Security, International Development, and Monetary Policy. The hearing on Thursday at 10am ET can be viewed here and includes the following panel of witnesses:

DeFi Dad
文章 34 篇
DeFi Dad is a DeFi super user sharing his money experiments and tutorials on Twitter and YouTube. He is an organizing member of the Ethereal Summit and Sessions, host of The Ethereal Podcast and a weekly contributor to The Defiant and Bankless.