BCH price has decreased by over 96% in value against BTC over the past three years. Bitcoin Cash (BCH) holders have no reason to celebrate, despite the 46% year-to-date gains in U.S. dollar terms. One year ago, the altcoin was the third-largest by market capitalization. It now risks dropping out of the top 10, having been surpassed by other cryptocurrencies including Litecoin (LTC) and Chainlink's LINK.

After three years of continuous devaluation, BCH finally traded below 0.01 Bitcoin (BTC) on Feb. 22. Besides being psychological support, it marks a 96.5% devaluation from its highest close of 0.285 BTC on Aug. 2, 2017.

Even though both cryptocurrencies' combined hash rate was somewhat comparable at the time, it has since become a one-sided battle, with BTC's hash rate dominance now over 98% versus BCH and Bitcoin SV (BSV) combined. 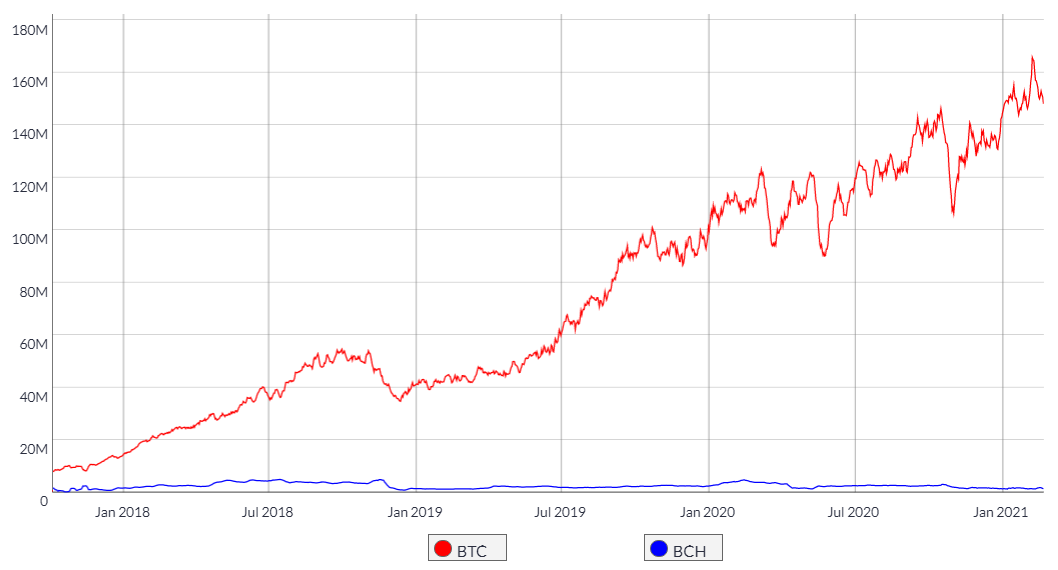 As depicted above, the BCH hash rate currently stands at 1% of BTC's 150 exahashes per second. However, BCH proponents argue that Bitcoin Cash's 10-block checkpoint system defends the blockchain against hostile reorgs, so less hash rate is needed.

Nevertheless, while the risk of a "deep reorg" is reduced, checkpoints come with tradeoffs, particularly the increased risk of a consensus chain split, according to BitMex.

The addition of checkpoints has also led to criticism from Bitcoin proponents, who argue that this solution compromises the decentralization of the Bitcoin Cash network.

Just woke up: So apparently Jihan took a lot of hashpower from Bitcoin to mine on $BCH. He got really scared and is burning a lot of money. https://t.co/RbObgu5fiSThey added a checkpoint to prevent attacks. It means that 1 person is saying what is the valid chain = centralized.

Daily active addresses are a vital on-chain metric, albeit they are often inflated when the lower transaction costs are considered alongside network security tradeoffs. Nevertheless, comparing BCH with Litecoin and Dash seems reasonable, as the three networks have average fees below $0.05. 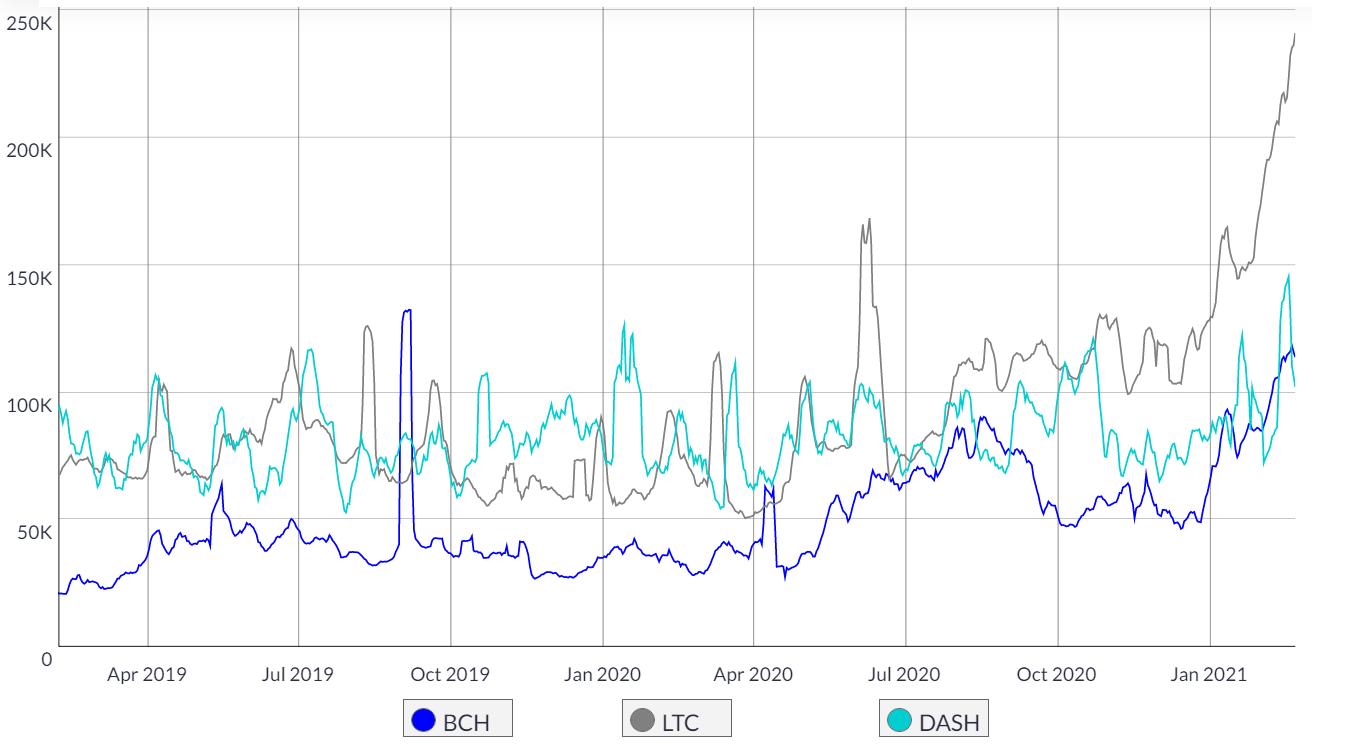 As the data indicates, Litecoin currently has double the number of Bitcoin Cash daily active addresses. Therefore, the activity on the Bitcoin Cash network is more similar to that of Dash, an altcoin with a $2.2 billion market capitalization 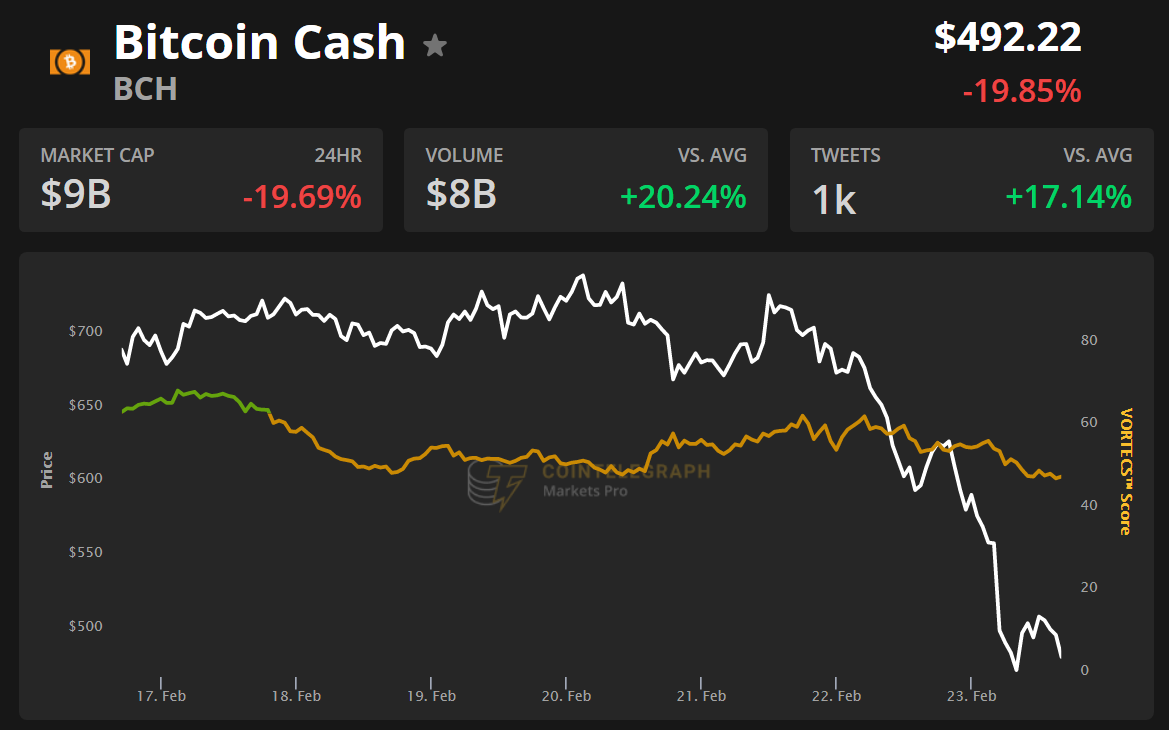 The views and opinions expressed here are solely those of the author and do not necessarily reflect the views of Cointelegraph. Every investment and trading move involves risk. You should conduct your own research when making a decision.

Cathy Barrera
文章 46 篇
Cathy Barrera, a columnist, is a founding economist at Prysm Group, an economic advisory group, and was chief economist at ZipRecruiter. She has a Ph.D. in business economics from Harvard.