Early in October of 1973 Henry Kissinger, the US foreign secretary under President Richard Nixon, was engaged in a now famous piece of telephone diplomacy with Golda Meir, the Prime Minister of Israel.

It had been a tense few weeks. After the Soviet Union began sending arms to Syria and Egypt, which were amassing troops along Israel's border, America started contemplating operation Nickel Grass. This was to send supplies to Israel.

But with OPEC, the world's most famous cartel, threatening embargoes all around, support for Israel would inevitably mean an oil embargo for the US.

European nations, for their part, were also on notice from the Arab states. Any helpful gestures toward Israel would result in instant oil embargoes for them, too.

This tense situation became known as the ’73 oil crisis. It had arisen in large part to an extended period of rock bottom prices for Middle Eastern oil, driving the United States’ own production into steady decline.

Even with US tariffs in place for protection, producers in Oklahoma and Texas couldn’t compete; Between 1970 and 1973, US imports of crude oil had nearly doubled, reaching 6.2 million barrels per day in 1973.

To compound matters further, the United States had a fleet of cars that had never been more immoderate in their use of petrol, with just 13 miles per gallon as standard. In the years preceding the ’73 crisis, cars had actually become longer and fuel efficiency had grown even worse. America had an oil addiction. 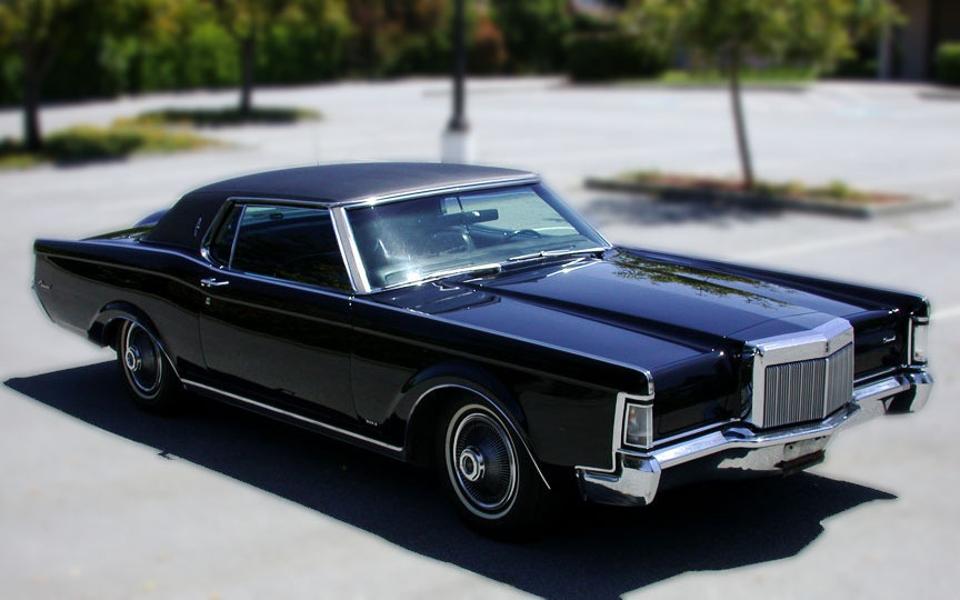 So in an attempt to manage this precarious diplomatic situation, Kissinger extracted a promise from the Israeli leader. There was to be no preemptive strike by the Israelis. That was the condition to get any help from the US.

Meir kept her side of the bargain, waited for the first strike, and on October 14, operation Nickel Grass saw the US airlifting supplies to Israel, landing at Portugal for refueling. The US didn’t have long to wait for the oil cartel’s response, and neither did Portugal.

On October 17, 1973, at a meeting in Vienna, and with Israel beating back advances from the Egyptian and Syrian forces, OPEC resolved to impose embargoes for any country now helping Israel.

Included were the US, Denmark, Netherlands, as well as Portugal, for allowing the US to refuel there. These embargoes took effect in December that year.

By October 24, Israel was ignoring UN calls for a ceasefire and was advancing on new territory; Soviet President Leonid Brezhnev now urgently wanted to stop this with troops.

On October 25, American forces went into a Defense Condition 3 level of alert known as DefCon3, which meant a nuclear alert. Kissinger now saw a “three out of four” chance of Soviet troop intervention.

The world had come close to another nuclear standoff, the oil taps were closing, and the price of a barrel of crude climbed vertiginously. As a wake up call of awareness for the US, it could not have been more abrupt.

The price of war

The full punishment for US involvement in the war soon became clear. A recession, along with the rest of the world, with the oil price scaling $60 per barrel - three times what it had been in the preceding months. 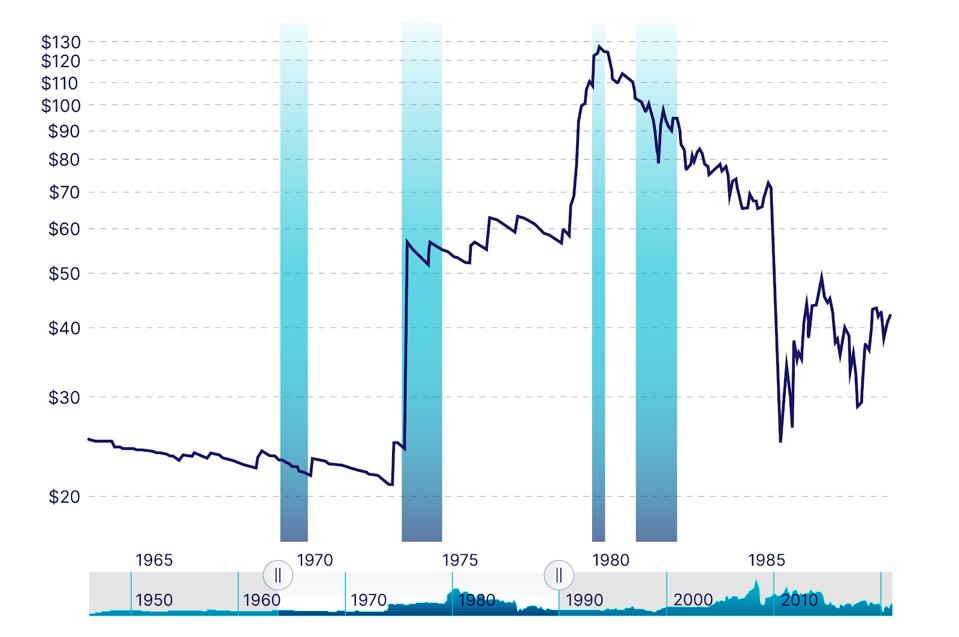 Outside the US, an energy crisis enveloped many other countries and their economies. 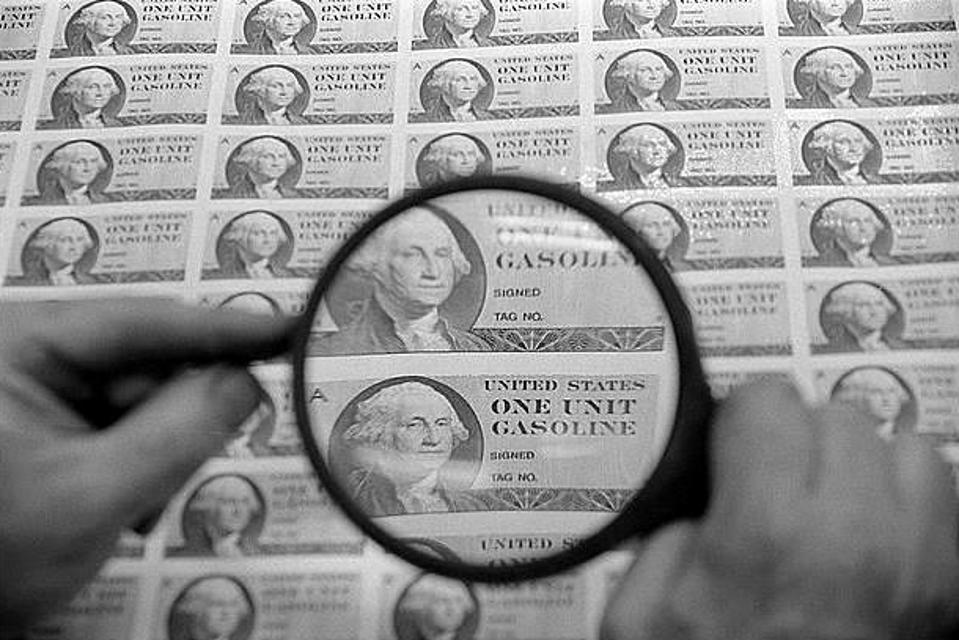 1974 America used number plate rationing and contemplated using these stamps to deal with the ... [+] crisis.

In the UK, Prime Minister Edward Heath had a coal miners’ strike to contend with, and created an emergency three-day week to safeguard fuel stocks.

Perhaps beyond the mere price hikes, the events had established the idea of oil as a magical commodity, immune from the normal logic of economics, an idea that took hold in both the popular and bureaucratic imagination.

Coming off the crude

President Carter resolved to change the US relationship with oil. He set up an energy commission, which brought together some of the nation's leading physicists and engineers in a bid to examine alternative sources of energy.

Carter put solar panels on the White House, which produced a small, if somewhat symbolic, amount of energy.

A 55 mile per hour speed limit was introduced on motorways for the express purpose of national fuel economy. The US auto industry took notice, as the graph clearly shows, and more and more fuel efficient cars started rolling off the production lines. If the Yom Kippur War brought an end to the dream of cheap oil, there was a similar wake-up call looming with nuclear energy.

In the fifties, President Dwight D. Eisenhower had helped stoke a sense of optimism about the future of nuclear.

In 1953 at the UN, he delivered his “atoms for peace speech,” which was filled with lofty wishful geopolitical ambition.

“Never before today has so much hope been gathered together in a single organization,” he declared.

Whether it was fusion or fission technology that represented the focus of this ambition isn’t absolutely clear.

The reality of fifties energy, of course, was desperate for that hope. In the UK, coal shortages were a regular occurrence, as parliamentary exchanges show, and reveal a sense of deep anxiety every winter.

But from a purely theoretical standpoint, the optimism had plausible basis. Take Einstein's famous E=mc2equation: here, the large speed of light value gets squared, then multiplies by whatever mass you are losing, to liberate an astronomical amount of energy.

That could be energy for a bomb, or peaceful and practical use. But would the coming decades see the theoretical amount translated into easy, steady kilowatt-hours?

The promise of early nuclear

Perhaps the Calder Hall nuclear power plant was the foundational example of a hope for nuclear energy abundance, with its four Magnox reactors that started pushing out power in the UK in 1956.

This installation came with a promise of such a surfeit of electricity, some thought it might even be unmetered.

Then there was the experimental fast breeder reactor, which as the name suggested could create more nuclear fuel than the uranium and plutonium they consumed.

This anticipation of an everyday energy utopia went beyond just the scientific world and became part of the public imagination.

In 1958, Ford had unveiled the Nucleon concept car, based on the notion that if nuclear reactors could go into a submarine, they could also go into your average automobile.

In fact, nuclear would be so omnipresent and commoditized, we would have a choice of reactor types (high performance or economy) under the bonnet of something we’d park outside the family home.

In 1963, UK Prime Minister Harold Wilson captured this mood with the phrase “the white heat of technology,” which referenced a world where skilled men in white coats monitored dials in a bright new modern factory, presumably pumping out many things including endless kilowatts of electricity.

But by the early 1970s some of the euphoria of this utopian vision was wearing thin.

In the US, nuclear plant cost overruns were sometimes a factor of ten above original industry estimates. For the 75 nuclear power reactors built from 1966 to 1977, cost overruns averaged 207 percent.

Throughout the seventies, the world became increasingly anxious about the risks of atomic power, with large demonstrations erupting in Spain and West Germany.

In the UK, coal miners joined the rising tide of protest against nuclear power. The miners were ostensibly concerned about safety, but presumably they were also concerned about becoming written out of the energy story. This story thread was to dominate the UK in the following decade.

If Calder Hall represented the birth of the dream of abundant meterless energy, the accident that befell the Three Mile Island reactor probably represented the end of it.

Around 4am on March 28, 1979, at a nuclear plant near Harrisburg, Pennsylvania, an event was unfolding that would bring the US nuclear dream to a close.

Starting as a relatively minor blockage in a secondary cooling loop of reactor number 2, a series of mishaps and unfortunate errors and deficiencies in the system snowballed.

It was later to qualify as a 5 out of 7 scale nuclear accident that became known as the Three Mile Island Accident. There had been a partial meltdown of the reactor, which suggested a much closer shave with something considerably worse than anyone had imagined.

As it was, the days following March 28 had proved frightening. Schools were closed and residents were urged to stay indoors. Farmers were told to keep their animals under cover and fed on stored feed.

But although there was a considerable release of radioactive materials, the eventual impact was thought to be not terribly significant.

However the optics and the causes of the drama did plenty of damage.

In 1981, citizens’ groups succeeded in a class action suit against Three Mile Island, winning $25 million in an out-of-court settlement.

In 1983, a federal grand jury indicted Metropolitan Edison, the owners of the plant on criminal charges for the falsification of safety test results prior to the accident. Such events were part of a rising public mood of distrust in nuclear plants.

If the accident itself wasn’t enough to inflame the growing anti-nuclear tide, the accident had the misfortune to follow tight on the heels of the premiere of a film called the China Syndrome.

The film, which grossed $51 million, had opened just 12 days before the Three Mile Island accident.

In it, the main character, a TV reporter played by Jane Fonda, is told that an explosion at a fictional nuclear plant located in Southern California “could render an area the size of the state of Pennsylvania permanently uninhabitable."

Whether in fact or fiction, nuclear energy had become associated with unbounded disaster and therefore unlimited liabilities that only a state-funded entity could ever contemplate.

While it would take one further accident, this time at a Soviet plant, Chernobyl, to deliver the coup de grace for the hopes of the nuclear era, the events of March in Three Mile Island meant the love affair with the atom had run its course.

For the US, the end of the dream and the sense of disorientation and unease was expressed quite lugubriously by President Carter in his address to the nation in July 1979, some four months after Three Mile Island.

With this speech died the utopian dream of fuel-a-plenty, and soon other ways would be needed to increase the amount of energy growing economies could harness.

In the next blog, we’ll look at the way various nations sought to fix this malaise that is so evident in Carter's address, and the “dash for gas” that ensued.

Tony Spilotro
文章 91 篇
I'm Tony Spilotro. I’m an avid Bitcoin supporter and maximalist due to my distrust in society and concerns over privacy, but also a strong believer that XRP could end up being the most disruptive altcoin on the market. I’m an aspiring technical analysis and trader, taking an interest in not only indicators and chart patterns, but with an added focus on unorthodox methods such as astrology, time, psychology, and more. I pride myself on the fact my content is research driven, educational, and entertaining, offering the crypto audience an unmatched value.